Basil was born in Clarendon, Jamaica in 1928, and came to London in 1954 aged 26. He was not only Haringey’s first Black Council Member, but was also a founding member of the Council’s Race Equalities Committee, Anglo-West Indian Conservative Society and the Hornsey Cooperative Credit Union. Basil received an OBE for his work with BAME communities, and his legacy means his endeavours continue to support such groups and organisations, not only in the borough but nationally too.

In May 1968, Basil was elected as the Conservative Party’s Council Member for the Stroud Green Ward. As the pages from the Hornsey Journal news article (17 May 1968) note (below), Mr Lewis was aged 39 at the time of the election, lived within his constituency in Drylands Road and worked a telephone communications engineer. He represented the Stroud Green Ward for ten years and then Crouch End from 1978 until 1982. 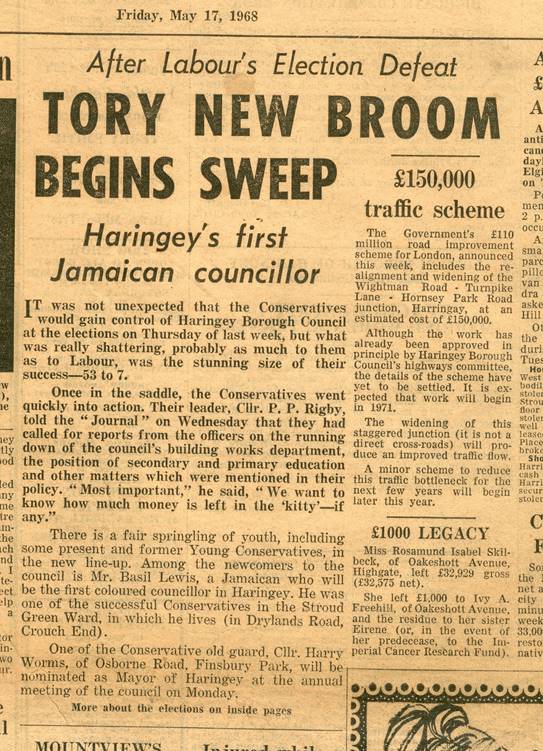 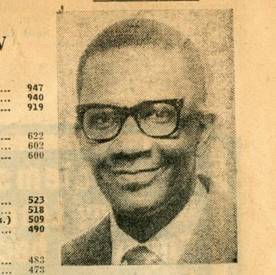 Photograph of Basil Lewis, as a winning Conservative candidate for Stroud Green in 1968, along with his comments, below from the local newspaper (Hornsey Journal, 17 May 1968) 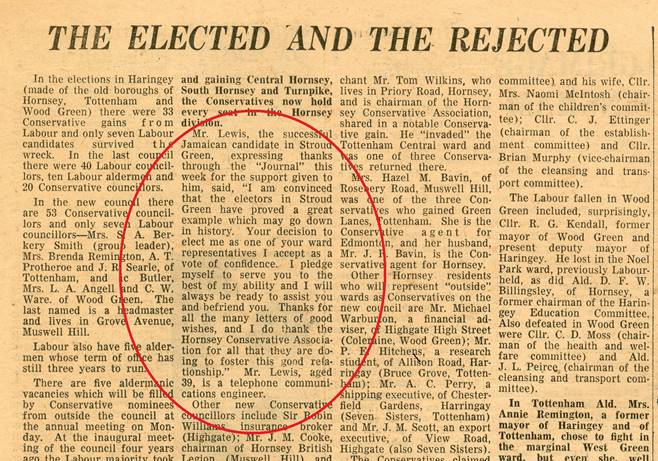 Before his work in local politics, Basil was a Deacon at the Baptist Church in Ferme Park Road, and it was there in 1962 with 11 other church members, that he helped form a savings scheme. At the time it was hard for new arrivals from the Caribbean to take out loans from the banks, which meant it was difficult for them to buy houses or set up businesses. In some cases, if they were able to take out a loan it was at a higher interest rate or they were asked to pay a larger deposit than most to secure the loan.

Initially, the church members set up a savings scheme, to help each other and the church’s congregation, without the constraints they were finding from the banks. These forms of savings schemes follow the ideas of another Haringey leader, Priscilla Wakefield (1751-1832) who, from the late 18th century in Tottenham, established the first Penny Savings Bank to encourage and enable the economic emancipation of women.

Although successful in its goals, the Baptist Church’s savings scheme had no official governance, which meant no interest was earnt and there were no legal protections for its members. The group were encouraged to follow the example seen throughout the Caribbean and establish a credit union. In 1964 Basil and his colleagues founded the Hornsey Cooperative Credit Union (HCCU) which was one of the very first credit unions established in the UK, giving people the opportunity to buy and furnish their own homes. The need was great and the credit union was popular with locals from the Caribbean communities, having over 100 members by the end of its first year.

In this commemorative publication celebrating 50 years of credit unions in the UK, two of Basil’s co-founders of HCCU, Reynold Grier and Bentley Hines, talk about setting up the credit union and it being so successful they were able to purchase property and set up a community centre in Drylands Road. Once legislation enabled the registration of credit unions in 1967, HCCU was the first credit union to become registered in the UK.

2018 was the 50th anniversary of Basil’s election as Haringey’s first Black Councillor and this landmark occasion was celebrated, along with other renowned leaders, at an event at the Selby Centre in partnership with 4U2 Newsmag, as this flyer shows. 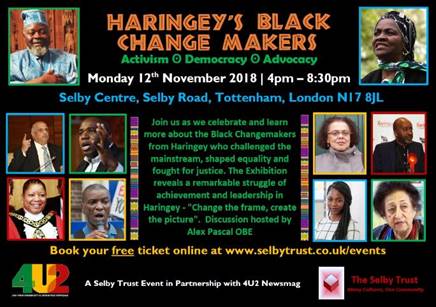 Fittingly, Basil was awarded an OBE for his work with BAME communities within Haringey and outside the borough. As part of his legacy, he will be remembered for the support he provided, along with his tenacity and his compassion to help others as shown by the various testimonies in the Ham & High newspaper’s obituary last week from friends and former colleagues.