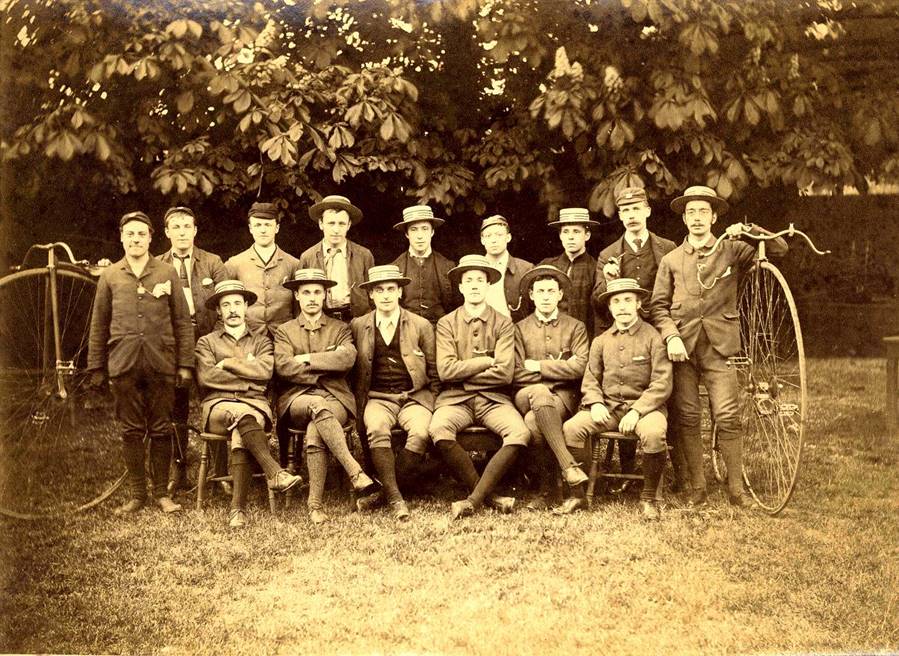 During what would have been the second week of the Olympic Games 2020, we continue to look at aspects of our local sporting heritage and find out about those who have cycled to success in the past.

From its invention in 1817 through to the modern day, the bicycle and cycling has been a huge attraction for many residents, as competitors and spectators.

A few weeks back – in our previous post on Pedal Power in Haringey (part 2) – we learnt about the Victorian amateur cycling champion, James Linzell (1831-1922) who lived in Tottenham and had won many cups for his cycling achievements – all on a Penny Farthing! In 1878, he rode his Penny Farthing in a long-distance race from Tottenham to Exeter.

This high-wheeler cycling contraption was extremely popular during the 1870s and 80. The Penny Farthing not only looked eccentric but also Victorian spectators could have fun watching eccentricities with Penny Farthings racing. One such event was the one seen below – the ‘Bicycle v. Horse Match’ between cyclist H. D. Stanton and Mr MacDonald’s horse ‘Lady Flora’, held on London’s only racecourse at Alexandra Palace in July 1875. Looks like hard work for Stanton – he was beaten by the horse in the race by 40 seconds …

Not far away from Alexandra Palace, Wood Green once had its own cycling track and athletics ground. From 1895 to 1900 – when cycling continued to be very much all the rage – the North London Cycling and Athletic Grounds were on the south side of Bounds Green Road. Opening on 7 June 1895, the grounds was on the site of the former grand house and estate of Nightingale Hall and covered 10 acres, in the area now occupied by Braemar Avenue, Northcott Avenue and Bounds Green Road. It was 500 yards in circumference. There was a roofed grandstand for 1,500 visitors and another uncovered stand for 300. In all, around 10,000 spectators could be accommodated.

With the nearby racecourse and other sporting facilities at Alexandra Palace, Wood Green was a great centre of excellence for sporting events in Victorian North London. In 1895 the cycling track saw a 24-hour marathon race for professional cyclists. These three photographs of the event (below) takes in two views of cyclists ready for the start. The third shows spectators on the edge of their seats, watching an unusual shot of three cyclists on the same cycling machine. (A three-person bike is apparently called a Tandem Bicycle. A bike that has two or more people on it is referred to as ‘Tandem’ because of the formation of it, not because of the number of riders. Although, a bike with three people riding it is also referred to as a ‘triples’ or ‘triplets.’)

The next year, in 1896, there was the first Ladies’ Cycling Race in England (against France) on an outdoor track. The grounds closed down in 1900 as the land was sold off for the new housing developments off Bounds Green Road.

And just a little further away, the renowned Finsbury Park Cycling Club (originally known as the Ferme Park Bicycle Club) was established in Finsbury Park, in 1883. It has been in continuous existence ever since. A full and illustrated history can be found on the Club’s website. The Club came about – just like others around the country – as more and more Victorians had become interested in cycling and racing. Below is a group portrait of some of the first Club members in 1887, posing with their Penny Farthings in the gardens of the Manor House Tavern that overlooked Finsbury Park. The photographs shown here are part of a significant collection of the Finsbury Park Cycling Club archive at Bruce Castle Museum.

The Finsbury Park Cycling Club in 1887, with names identified on the reverse of the photograph as:

With the ‘new’ motor cars on the roads during the Victorian period, the early position for cyclists being on the road wasn’t certain. In July 1878 Parliament had come very close to passing an amendment of the Highways Act which would have banned cyclists from riding on the road. The position of cycle racing on the roads was still less certain. Cycling clubs in the 1880s – although cycling on quiet country roads – were constantly interrupted by the police. By 1890 the National Cyclists’ Union took the decision to ban racing on public roads, fearing the government might ban not just racing cyclists but all cycling. Races were therefore held often in secret, with ‘codes’ used between clubs to arrange ‘meets’. Great sport was had by racers and the police who tried to catch them in the act of ‘riding furiously’. Races up against the watch became common as cyclists started racing at one minute intervals to disguise their true activity. Thus, the British Time Trial was born with Finsbury Park CC in the vanguard of the movement.

One cyclist Jack Lauterwasser (1904-2003), joined his local club at Finsbury Park and became a bike pioneer and an Olympic legend. Jack (pictured below) believed the hours whilst working on deliveries on his grocer’s bike had put iron in his legs: “I really was a novice, a greenhorn who knew nothing,” he would later remember, “but in my first season I progressed to being Club champ and winning some good time-trials.” A member of FPCC for over 79 years, Jack was a double medal winner at the 1928 Amsterdam Olympics. His Olympic success was the team silver medal won by Britain in the 168km road race.

The Finsbury Park CC may well have moved on from its origins with cycling on Penny Farthings, but in 1953 the Club travelled back in time with this delightful little film by British Pathé when members took to riding vintage cycles in full costume!

Today, Finsbury Park CC is a very progressive club with the interests of all cyclists very much at its core. Members take part in most branches of cycling and are active in the promotion of races and the management of the sport at local and district levels.

From the steampunk look of the Victorian Penny Farthings and the handle-bar moustaches of their riders, let us jump in time to the build up to the London 2012 Games in London. Although Haringey did not have any venues or Olympians for cycling in 2012, there were connections with the Cultural Olympiad when Haringey’s cycling heritage inspired community art engagement, working with Haringey-based artist Philip Diggle. Known for being part of the politically-charged Punk movement of the late 1970s and painting on stage with his musician brother in the Punk band the Buzzcocks, we knew we might have a lot on our hands with Phil …. literally his hands-on style of working either with his secondary school students or with us at the Tottenham Community Festival in 2010, the artwork created was a release of energy, a performance using a ‘found’ old bicycle to cycle through the riot of colour and paint on the long canvas on the floor. It was a lot of fun as you can imagine …

The paint-stained bicycle lived to tell the tale and was itself recycled into another community art project, inspired by bicycles – this time in 2011 to commemorate the 60th anniversary of the Festival of Britain. Back in 1951, cyclists from Wood Green decorated their bicycles with flowers for a floral bike parade. That was re-enacted in 2011 at the South Bank Centre with the community art floral bike we had made earlier as inspiration as the centre of attention with more and more hand-made flowers added to it…..

And a couple of other films just to end this post for today, with very different cycling events held at Alexandra Palace – the first is The International Cyclo-Cross event held on a damp Sunday in December 1973 (won by the British Champion, John Atkins of Coventry) – runs for 1 minute 52 seconds; and in British Pathé’s News in a Nutshell, item three (at 1 minute 18 seconds in) shows a Cyclists Rally of 15,000 cyclists in 1937 – with great views of the Palace – complete with Olympians.