Did you know that between 1881-1883, in the Alexandra Palace grounds, adjacent to the upper lakes, there once stood an enormous wooden rotunda? Well, I didn’t know – but my late friend, colleague and Panorama expert Ralph Hyde (formerly Keeper of Prints, Maps & Drawings at Guildhall Library) was soon going to enthusiastically tell me more. Ralph shared with me his lecture notes in an unpublished manuscript:

“Inside this strange looking building there was a painting – not the convenient-sized painting you would hang over the mantelpiece, but an absolutely massive painting covering – and wait for it – 20,000 square feet of canvas. At that size, needless to say, what you had here was one of the largest paintings in the world!

An emperor, no less, had ordered it to be painted. Working with French designer Colonel Langlois, thirty-three artists had painted it. They had used 3 and a half tons of paint.

The painting – the Siege of Sebastopol – lined the walls of the building. In other words, it was a 360° panorama (or cyclorama). It was an illusionistic image. When you paid your entrance fee and entered the building you were transported from leafy North London to the Crimea. Suddenly you were a spectator within the turmoil of that prolonged and bloody episode. The national and local newspapers were all a-buzz, with articles in The Times and the Tottenham Herald in September 1881.

‘The visitor … entering this by a ground passage, mounts a spiral staircase and suddenly finds himself in a central platform in the interior with the canvas surrounding him on all sides. The effect is almost magical.’ 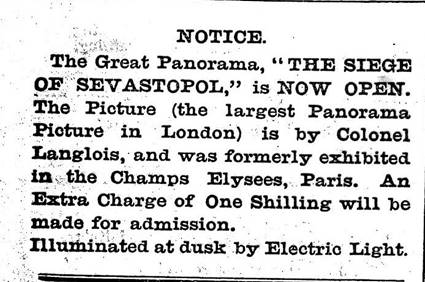 This was the secret of the panorama’s success. It was what panoramas were all about. This was an early version of ‘3D’ cinema. “

The excitement and interest of looking at the intricate and fascinating details of panoramas stretches back centuries. Knowing about one of the largest panoramas in the world at Alexandra Palace in the late 19th century and our own interest in the panoramic art-form, we were delighted to be approached in 2016 by a local artist who was intrigued by panoramas herself and very interested in creating her own. On a large scale.

Gabriela Schutz lives in the Bounds Green area. Her personal fascination with panoramas goes back many years. She had already undertaken one panorama of Westbury Road N11, that had been on display at The Geffrey Museum in 2015. Her proposal for her new panoramas to be exhibited at Bruce Castle was to focus on both sides of Myddleton Road – a vibrant and diverse Victorian commercial street in Bounds Green, that has seen regeneration in recent years. She also proposed a third drawing of the New River which goes under the street.

As Gabriela said of her work: ‘The panoramas of Myddleton Road represent many walks in the road. Hopefully they will serve as an historical document of the street as it was in 2016/17. Drawing the street, rather than viewing via Google Earth or Streetview, is about slowing down and looking properly at things – and that is true for myself, the artist, and for you, the viewer…’ 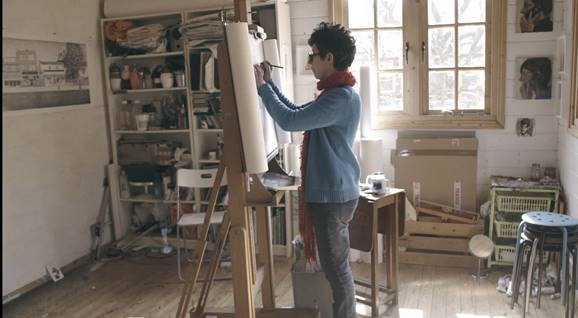 Gabriela in her studio, © the artist: Gabriela Schutz

Gabriela worked from photographs in the making of her two pencil drawing panoramas of Myddleton Road, representing the north and south sides of the road. She started drawing onto paper on 13th October 2016 and completed the last work on 5th May 2017. 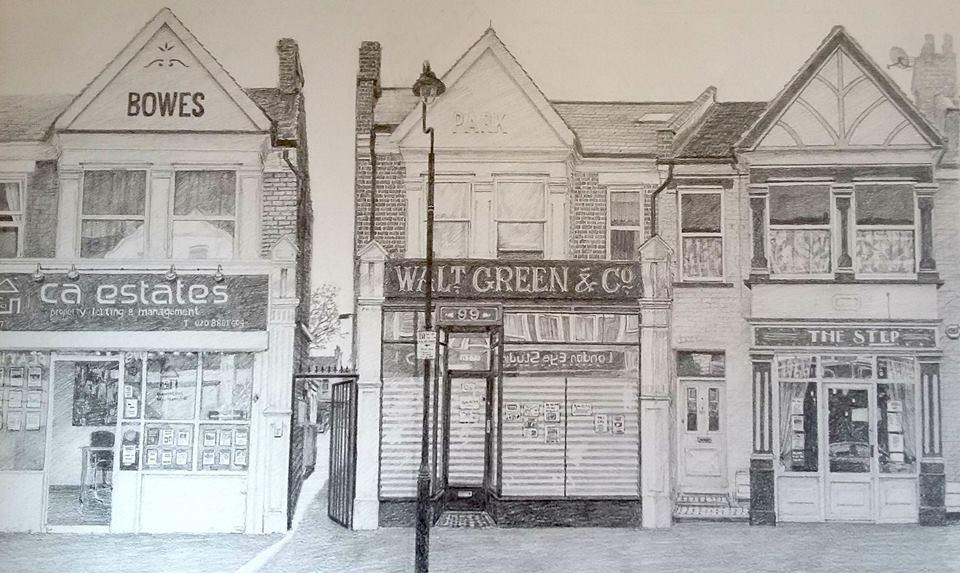 Detail of the north facing side of Myddleton Road, © the artist: Gabriela Schutz

Over the six months in the making of the panoramas, Gabriela spent 990 hours drawing, and used 30 pencils and 4 erasers. Whilst drawing, she listened to audio books, lectures and CDs, and tuned in to Radio 3, 4 and 6, and BBC London. She drank about 400 cups of tea and coffee.

You can hear Gabriela talk about her panoramas and see how she did it by clicking on the link to this short film here. 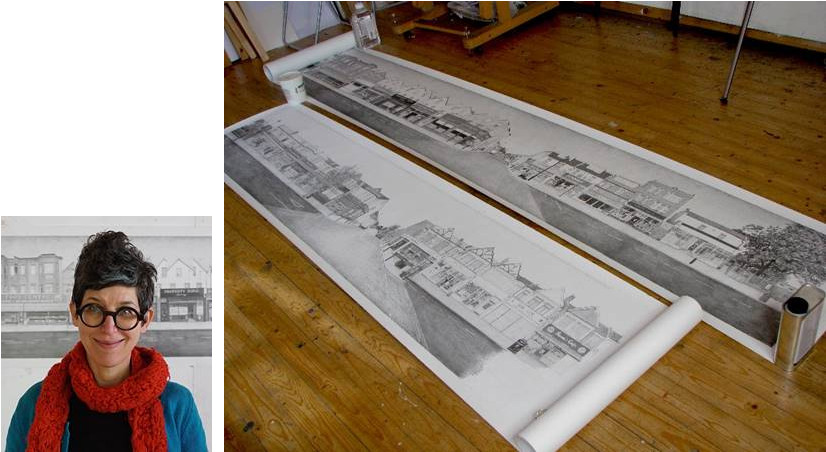 The panoramas in progress in Gabriela’s studio, © the artist: Gabriela Schutz

And here is some information about Gabriela herself: she is an Israeli artist based in London since 1999, and lives in Bounds Green. She describes her work as examining the way we experience life through the prism of technology, communication and globalisation, and the reaction of moving to localism, craftsmanship and slowness. She has exhibited nationally and internationally in museums and galleries such as the Geffrye Museum, the Danielle Arnaud Contemporary in London and Ein Harod Museum and Petach Tikva Museum in Israel, and The Elizabeth Foundation for The Arts in New York. Gabriela’s work has been short-listed three times for the Jerwood Drawing Prize and twice for the neo:printprize. Her work is included in large corporate art collections as well as many private collections in Europe, the U.S.A and Israel.

You can explore more of Gabriela’s work and exhibitions on her website here.

View of the two panoramas on display in the Coleraine Gallery at Bruce Castle, May – October 2017, © the artist: Gabriela Schutz

The south facing side of Myddleton Road, © the artist: Gabriela Schutz

Her installation of two drawn panoramas was called ‘A Walk in Myddleton Road’. They measured 7.3m each.

Gabriela talks more here about the drawing of her panoramas during 2016-17:

‘These days we spend so much time on our phones, exchanging information and communicating with distant people – yet at the same time being by ourselves. It is the personal and physical connection with a place which is the heart of this project. It is about being part of a local community and engaging with reality. Drawing is a way of observing the world and being totally present. During the 6 months it has taken to draw the panoramas, I have been intrigued by the changing architectural styles along the street, by the shop fronts representing different periods of time, diverse cultures and distinct aesthetic tastes. Over this period of creating the panoramas, 3 shops have changed or newly opened.’ 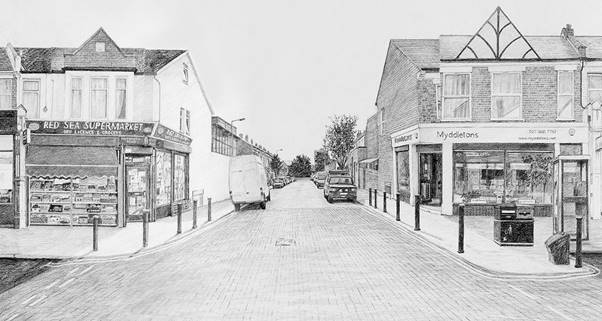 Detail of south facing side of Myddleton Road, © the artist: Gabriela Schutz 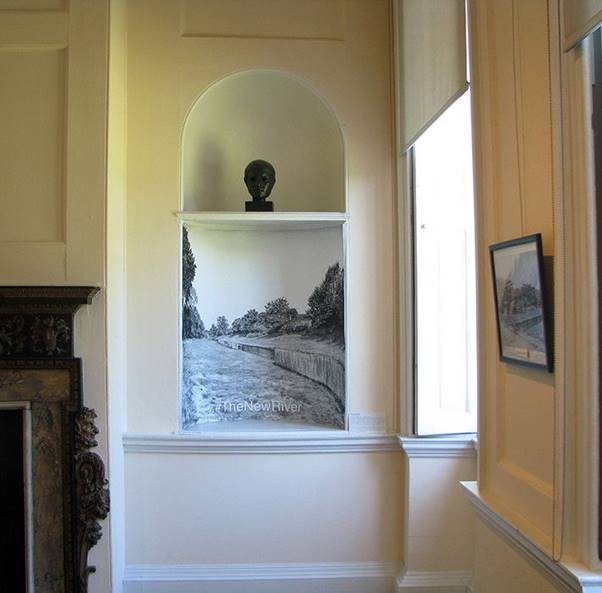 View of the #New River drawing on display at Bruce Castle, © the artist, Gabriela Schutz

Gabriela continues sharing her beautiful artwork through exhibitions at galleries both locally and throughout London. She also runs very popular and enjoyable drawing classes that you can still book and take part in online – so do check out her website for more details for this, and make enquiries about classes and indeed any of her artwork: www.gabrielaschutz.com

To end this post, we have selected a few wonderful photographic views of Myddleton Road from our collections at Bruce Castle. Taken at different periods of time, they show the distinctive charm of this street with its diverse range of shops, used and enjoyed over generations in this community.

In 1957, Myddleton Road could still boast six major provision stores, including a Co-op, the Home & Colonial, and Gunners. There were also four butchers, five greengrocers and two bakers.

Previous PostThumb’s Up for the (Penny) PostiesNext PostDid you know …. Haringey was where cinema first started?