Lets step back in time to look at the Woodside area of Wood Green, which is tucked up by the Enfield border on its northern edge, with White Hart Lane to the south. Woodside resident and Membership Secretary of the Friends of Bruce Castle, Cherry McAskill, has very kindly helped us with the following post which examines one estate and its house that was built in Woodside in the early 1800s. We will also take a closer look at a very special – some might say enchanted – little building!

The main estate in this corner of Wood Green was the Chitts Hill Estate, which was originally established as part of the larger Belsars Estate from the late 17th century. The estate was primarily agricultural land through into the 18th century, with no evidence of any substantial residential buildings existing on the property during that time. The land was owned by wealthy and influential people including Josiah Wedgwood (1730 -1795), the founder of the world-famous pottery dynasty, who owned the land from 1785 until his death in 1795.

In 1805, the land was purchased by James Clark, a City oil merchant. Clark had Chitts Hill House built for him in 1805-06 at the top of Chitts Hill (now Tottenhall Road) with its situation offering views over the New River to west and south. As the photograph below shows, it was a grand house, and it would have made quite a statement looking down over the surrounding lands. 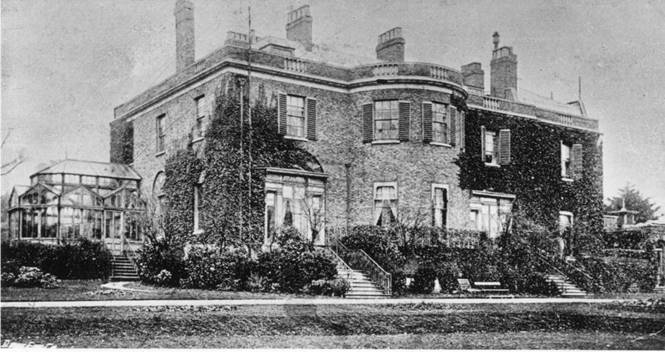 The house changed hands in 1815 on the death of James Clark, and was purchased by John Overend, a Quaker banker. It was Overend who built the Lodge and carriage drive at the entrance to Chitts Hill House on previously common or waste land in 1822, as described in the Hornsey Historical Society’s publication, People and Places Lost Estates in Highgate, Hornsey and Wood Green (1993, Edited by Joan Schwitzer):

‘In the previous year (1821) John Overend sought leave of the Tottenham Vestry to enclose a further piece of the waste land (1 acre 3 rods 24 perches approx. 6070 square metres) to provide the carriage drive from the High Road to the house. This was granted at a rate of £5 annually but with the proviso that a passage of 25-foot width was left open to provide for access from High Road to the lane to White Hart Lane to protect the public access… The same Court Rolls bearing the date 4th May 1822 records the fact that the entrance lodge had been erected on part of the designated waste land.’

The stunning Vestry Plan of Chitts Hill Estate (below) dates from the 1890s when boundaries of the estate were Southgate Road (now High Road) to the west, and with ‘proposed new road’ to the north which is now Lyndhurst Road. You can see (in pink) Chitts Hill House in the centre of the plan, the Lodge is the small pink circle at the corner of Southgate and Woodside Road and the building at the bottom section of the plan is Woodside House (now the council building, George Meehan House and Haringey Register Office). 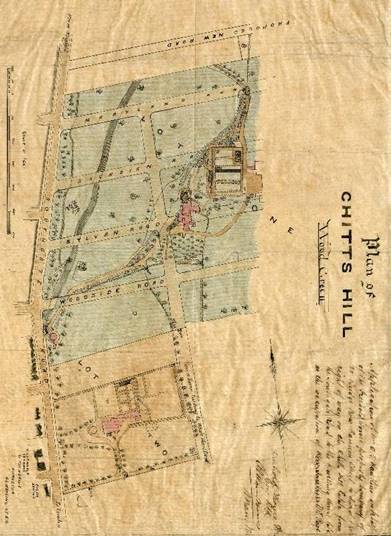 The plan was drawn to assist in the sale of the land for redevelopment and shows the layout of the proposed new residential streets of Woodside, Sylvan, Arcadian and Maryland roads cutting through the property. Although Chitts Hill House was demolished to make way for Sylvan Road’s eastern extension between 1895 and 1900, today there is still key part of the estate which survives for all to see. 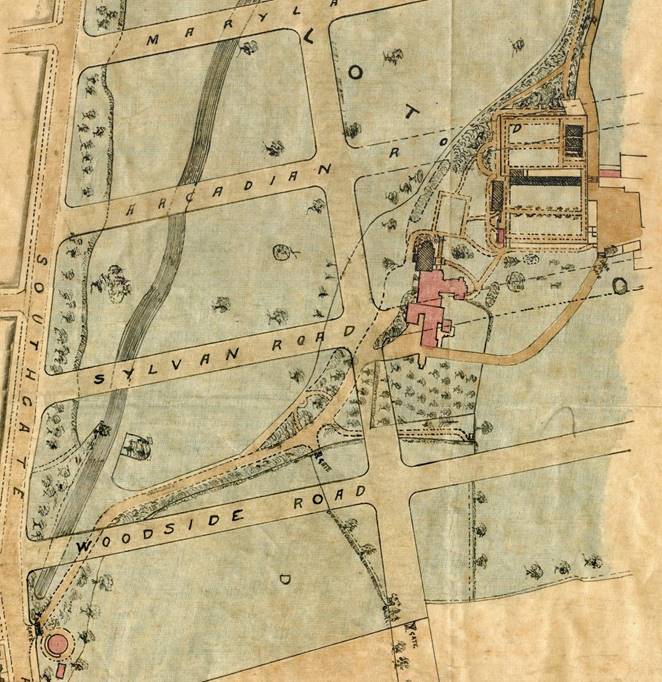 Detail of the Plan of Chitts Hill Estate, Wood Green (ref No.135)

As you make your way up the High Road away from Wood Green Shopping City, past the Civic Centre towards the North Circular, you can still see the entrance Lodge on the right-hand side, just inside Woodside Park. It is known locally as the ‘Mushroom House’ – and from the photograph below you can probably guess where it gets its name from! The Grade II listed building was erected in 1822 and is considered to be the oldest surviving building in Wood Green.

The Mushroom House, when it was a tea room, c.1905. You can see the sign for ‘Fry’s chocolate’ in the window of the door, and a large notice just outside telling us ‘hop ale’ is for sale (quite some tea room!)

The Lodge originally provided accommodation for the gatekeeper or other estate employees. In 1871, the Census shows it was home to the coachman, his wife and six children plus a lodger – that must’ve been a tight squeeze! With the creation of the municipal grounds in 1894, the building became a tearoom and continued as such until the 1960s. It was a children’s playhouse in the 1970s and it was during this period it became popularly known as the ‘Mushroom House’. It became Grade II Listed in 1974 and at present it is in residential use.

I am afraid we have no original plans in the Archive of the building itself, nor any reasoning behind its unusual design and structure. This is Historic England’s listing of the building which gives an outline of its layout: 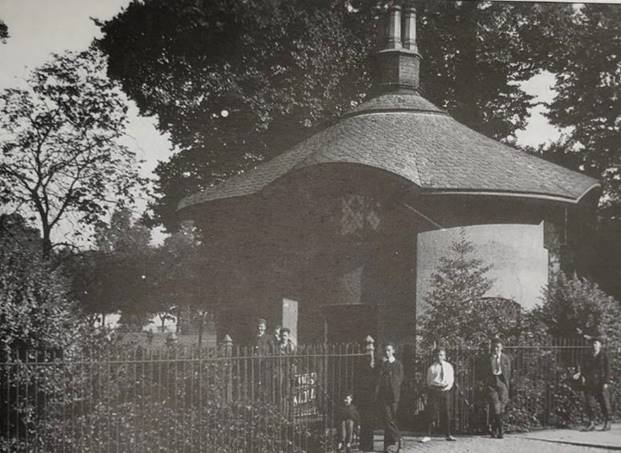 Another view of the Mushroom House, when it was a tea room, c.1910

Cherry, and her neighbour, have some personal recollections of this little house:

“My neighbour, May Hall, whose late husband George worked at Bruce Castle as relief caretaker, remembers her children playing in the Mushroom House and also listening to music round the old bandstand. She thinks it was local, military and brass bands who played there.

My own children played in the park for short periods of time during the early 1990s. They were just short spells as we had to pop home for the loo! My son especially remembers using the gate posts as goal posts. Also in the late 1990s early 2000s there was a great jazz festival during the first weekend of September that attracted a crowd of locals, sitting on the grass with picnics, wine and lots of kids letting off steam before the new school year. Live music in the park was a real treat at the time.”

Below is an Ordnance Survey map from 1864 showing the area around Chitts Hill House (circled in red) and its rather curious Lodge – the Mushroom House (circled in blue). You can see the long carriageway leading from Green Lanes, past the Lodge and up to the main house, and the New River with its horseshoe bend turning under the road, just above the Lodge. 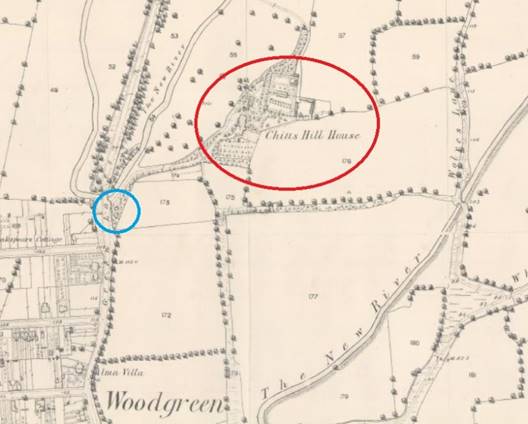 With the coachman living in the Mushroom House in 1871 and the long carriageway leading up to the main house, it has made us think about the people travelling into the City of London from Wood Green for work and commerce, and the coachmen taking them in their privately-owned carriages from the early 1800s. Like you all, staff at Bruce Castle are currently at home (working remotely), so we have had to turn to the internet to do some of our research. We found a reference to this rather curious publication held in the Wellcome Collection, Traveller’s Oracle: or Maxims for Locomotion, published in 1827, not long after the little Mushroom House was built. The book lists instructions about how to be a carriage driver or coachman, telling us what is expected of them in their work, routes to take, along with how their employers should behave as well. Perhaps a 19th century version of ‘The Knowledge’! 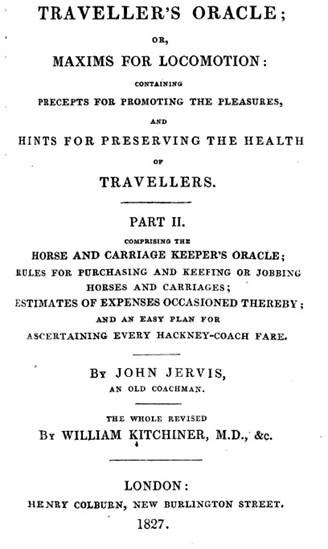 Here is what it says about being a coachman:

“A careful Coachman is a valuable Servant … [and] should be skilful, Nimble, Hardy, and Honest, should love Horses, and have a desire to perform all his work well: – when a Master findeth a Lad with these qualities, he should not easily part with him.”

Included in the publication is also a list of fifteen things a good Georgian coachman should not do. Here are five rather specific instructions:

We are lucky enough to hold some lovely images of Georgian coachmen in our Postal History Collections at Bruce Castle Museum and Archive. Below are just a small selection, showing a coachman, a traffic jam of coaches and horse-drawn carriages and some unusual views of mail coaches depicted on decorative ceramics.

So, that ends our post for today about the oldest and littlest house in Wood Green. A big thank you to Cherry for her research and recollections, and also thank you to Wood Green local historian Albert Pinching, as we have also liberally dipped into his informative history book Wood Green Past, in writing this.

The delightful and enchanting ‘Mushroom House’ has been many things over the years, a Lodge, a tea room, a children’s playhouse and a place to live in. More than just a curiosity, this Grade II Listed building is a direct link to Wood Green’s pre-Victorian past and we are very pleased it is still very much part of the area.