Haringey has a long, proud history of being home to community leaders, reformers, campaigners and activists. Some were born here or moved into the borough to set up their home, and others have come to Haringey needing a place of safety, fleeing or exiled from their homeland. Whatever their reasons for being in Haringey, they have successfully led our communities as advocates and activists for change, sharing with us their skills, experience and knowledge in reform, culture and the arts, helping us to make the borough and our society what it is today.

Although sadly 2020 has been dominated by the Covid-19 crisis, this year is an important one to reflect on a few anniversaries in relation to some very significant people linked with Haringey. It was 60 years ago when Oliver Tambo (1917-1993), the former President of the African National Congress (ANC), and his wife Adelaide (1929-2007), fled South Africa’s apartheid government and were exiled, coming to London in 1960. They settled at 51 Alexandra Park Road, Muswell Hill with their family, and lived there for over 20 years. 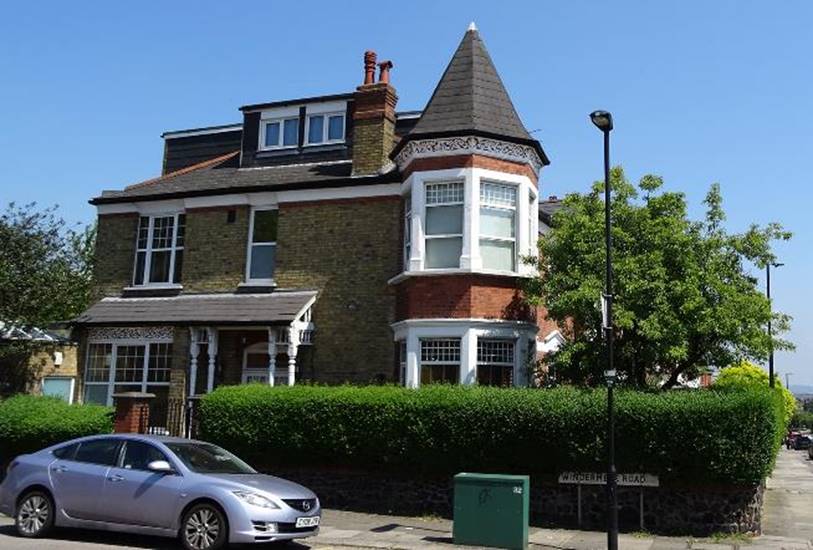 As the ANC’s figurehead in Europe, Oliver was vital in canvassing international support for the fight against the apartheid government. The Tambo’s Muswell Hill home was the centre of ANC’s international political activity from the 1960s onwards and they were hosts to some extremely important people during their time there. One such guest was their friend Nelson Mandela, shortly after he was released from prison in February 1990 (and 2020 is another significant anniversary of 30 years since his freedom!). His visit to their home in April 1990 was captured on the camera of a young and local photographer Vassa Nicolaou – we have some of those rare photographs now in our collections at Bruce Castle (with thanks to the Friends of Bruce Castle in supporting the museum and archive to acquire them). 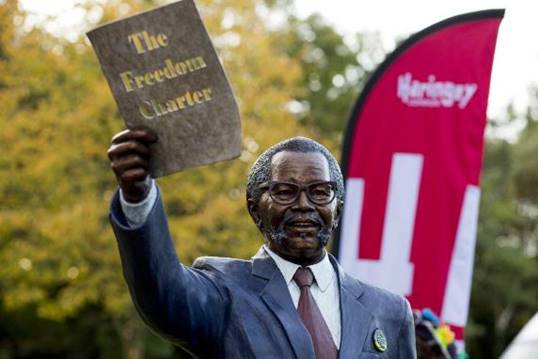 On 27 October 2019, on what would have been Oliver Tambo’s 102nd birthday, a statue of him was unveiled in Albert Road Recreation Ground – just along the road from their house. The sculptors are Cape Town-based and worked collaboratively on the piece: Tania Lee, Lungisa Kala, Christina Salvoldi. It was cast by foundry Sculpture Casting Services, in Somerset West, Cape Town. The statue was unveiled by the South African High Commissioner to the UK, Her Excellency Thembi Tambo – the Tambo family’s eldest daughter and who had grown up at Alexandra Park Road.

In the 1980s, Anti-Apartheid supporters in Haringey were fundraising, leafleting and demonstrating in public. Shops in Wood Green, Hornsey and Tottenham selling South African goods were occupied by the movement’s members and supporters. Reformer and politician Bernie Grant (1944 – 2000) was, of course, amongst those committed to the Anti-Apartheid Movement. Our previous special commemorative post marking and reflecting on the 20 years since his passing, paid tribute to his important social and political contribution to Haringey, as Europe’s first black Council Leader and MP for Tottenham. Bernie’s exceptional legacy, the Bernie Grant Arts Centre and the Bernie Grant Trust Archive continue to inspire and help us to challenge for change in the areas of social justice, community cohesion, activism and equality.

Today’s post, will look at another important Haringey reformer, campaigner and activist – the poet and writer John La Rose (1927-2006). Born in Trinidad, as a young man in the 1940s he helped found the Workers’ Freedom Movement, editing their journal ‘Freedom’. As an executive member of the Federated Workers’ Trade Union, he became General Secretary of the West Indian Independence Party and contested a seat in Trinidad’s 1956 General Election for the party. 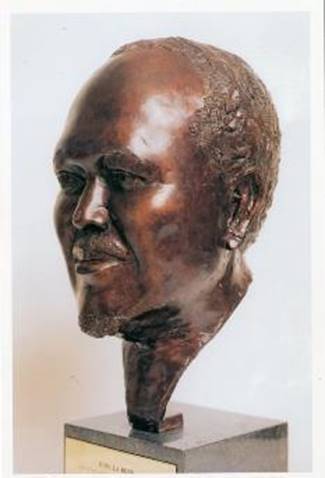 Postcard of a bust presented to John La Rose on his 75th birthday in 2002.

In 1961 John came to Britain where he spent the rest of his life campaigning for equal rights for the UK’s black communities. A true gifted polymath, John brought together his artistic ideals through his poetry and writing along with his political activism. For him, giving people the opportunity to have their voice heard was an essential aspect of self-determination – be it through being part of a union or as artistic expression.

In 1966 John joined up with the Jamaican writer and broadcaster Andrew Salkey and the Barbadian poet and historian Kamau Brathwaite to co-found the Caribbean Artists Movement (CAM). The organisation celebrated a sense of shared Caribbean artistic identity, providing a platform for Caribbean artists, poets, writers, dramatists, actors and musicians to perform and share ideas. 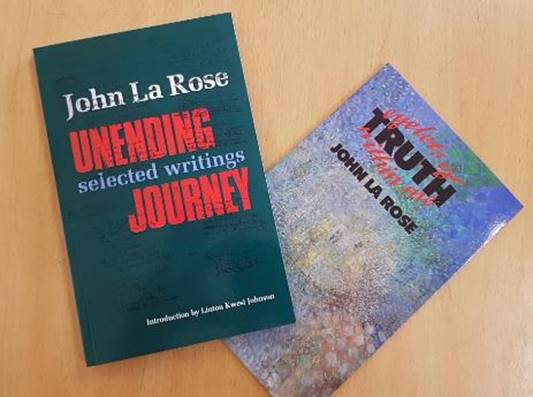 The same ideals to celebrate Caribbean culture, history and politics were carried through by John when he opened the UK’s first black publishing house and bookshop New Beacon Books in Stroud Green. With his partner Sarah White, in 1966 they worked initially from their home in Albert Road, N4 before moving round the corner and opening the bookshop at its current premises, 76 Stroud Green Road. Again, through publishing, John enabled people to share their words, views and thoughts with the wider community and to national and international audiences. 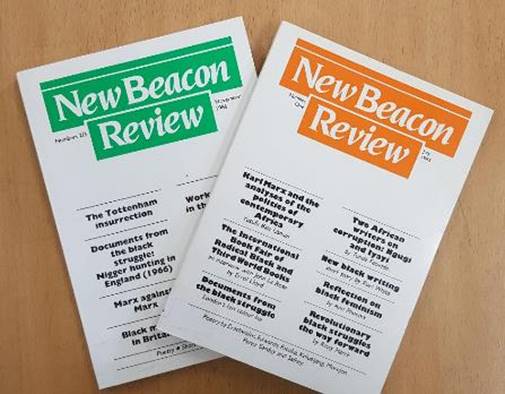 It was from Stroud Green Road that John based his local activism and campaigns for educational reform. The Black Education Movement in the 1960s was a strong move and reaction against the banding system and the placing of West Indian children in schools for the “educationally sub-normal”. He founded the George Padmore Supplementary School for West Indian Children in 1969 and helped establish the Caribbean Education in Community Workers’ Association. In the 1980s he helped set up and was Chair of the National Association of Supplementary Schools. John also helped launch the influential Black Parents’ Movement in 1975 to combat the brutalisation and criminalisation of black youths, and to campaign for youth and parent power and decent education. 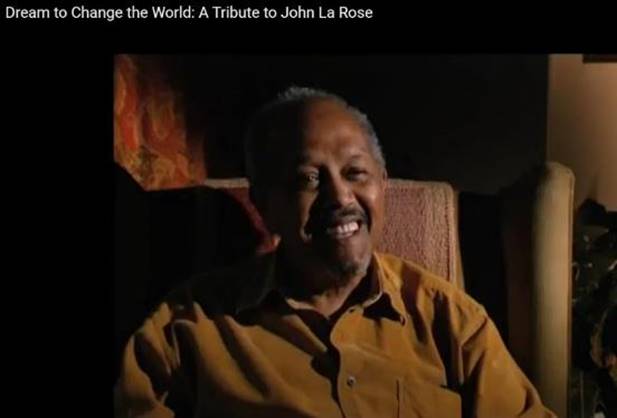 A still from Horace Ové’s film Dream to Change the World: A Tribute to John La Rose –  © Redbox Productions 2005.

To hear from John La Rose himself talking about his life, influences and the campaigns and activism he was involved in, we recommend you watch the film Dream to Change the World – A Tribute to John La Rose by Horace Ové and Redbox Productions in 2005. John takes the viewer on a journey through carnival, steelpan and calypso to show the links between the arts and social transformation.

You can watch the film on YouTube in two parts here: Film Part 1. (34 mins) and Film Part 2. (33 mins). The film was directed by Horace Ové – a fellow Trinidad-born British filmmaker, photographer, painter and writer. Ové is one of the leading black independent film-makers – and was noted by the Guinness World Records for being the first black British film-maker to direct a feature-length film, Pressure (1975).

In 1991, John established The George Padmore Institute (GPI) at the Stroud Green Road site, as an archive, educational research and information centre, preserving collections relating mainly to the black community of Caribbean, African and Asian descent in Britain and continental Europe. It is at GPI that you will find the highly significant archive of John La Rose, housing his papers, essays, photographs, leaflets, artwork and letters. It is a heritage ‘treasure trove’ of John’s extensive and wide-reaching work, as well as the nationally-important campaign resources, documents, material and reports on educational, cultural and political initiatives in the black community and wider society in Britain and abroad.

At Bruce Castle, we have had the good fortune of being able to support and work with the GPI for heritage projects funded by the National Heritage Lottery Fund, as well as holding events at the museum showcasing, using and learning about the GPI collections. We have also borrowed archive material and objects from the GPI for various of our own exhibitions, such as the recent We Made It! exhibition featuring a personal card (below), drawn by textile designer Althea McNish (1924-2020) for her friends John La Rose and Sarah White, and also Local Reflections about Nelson Mandela and Oliver Tambo in 2014, remembering and honouring Mandela a year on after he died in December 2013. The council also honoured John not long after his death in 2006, by naming a new build of housing in Champa Close (off Bruce Grove in Tottenham), John La Rose Court.

A card sent to John La Rose and Sarah White from Althea McNish and her husband John Weiss.

From the collections of George Padmore Institute, on loan to Bruce Castle Museum for the We Made It! Exhibition

Unfortunately, during these incredibly difficult times, funding sources for heritage and cultural organisations such as GPI are limited. They have just launched a crowd funding page for people to contribute to help them in caring for the collections for future generations to continue to learn from and inspire. John’s legacy is evident through the George Padmore Institute, New Beacon Books, his poetry, essays and the numerous campaigns for social justice and equality led by him. By helping GPI you are not only preserving the collections about one of Haringey’s most noted activists, artists and reformers, you are also preserving the stories of all those influenced and helped by John’s life-work. Do take a look and explore their wonderful online catalogue.