The ensembles worn by Her Majesty The Queen for her two appearances on the Buckingham Palace balcony during the Platinum Jubilee weekend will go on public display for the first time from this Sunday (3 July) at the Palace of Holyroodhouse.

The outfits form part of a special display commemorating The Queen’s historic Platinum Jubilee, which will be included with a ticket to Edinburgh’s royal palace from Sunday, 3 July until Sunday, 25 September. Visitors will see a display of outfits worn by Her Majesty on occasions to celebrate the Silver, Golden, Diamond and Platinum Jubilees, as well as a selection of gifts presented during The Queen’s official engagements in Scotland throughout her 70-year reign. 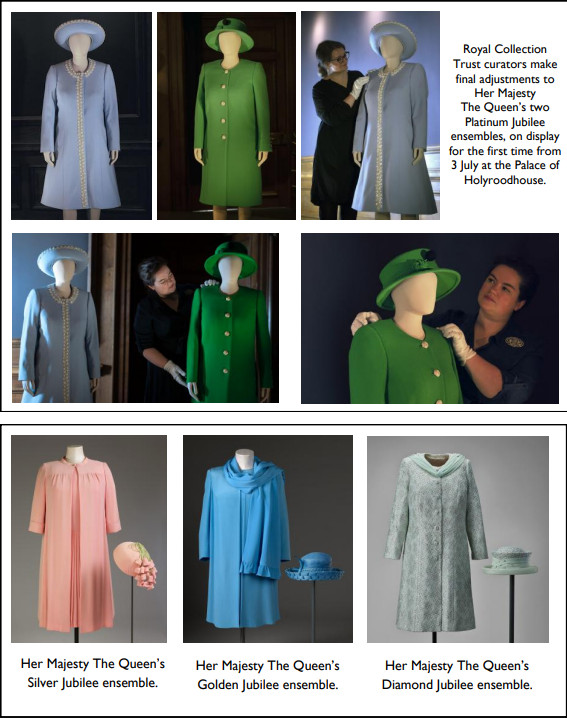 Watched by millions around the world, The Queen made her first appearance during the Platinum Jubilee weekend this year when she stood on the Buckingham Palace balcony to take the salute and watch the flypast during the Trooping the Colour ceremony on Thursday, 2 June. For the occasion, Her Majesty wore a pale blue dress with a matching coat and hat, both featuring a delicate beaded and diamanté trim. The ensemble was designed by Angela Kelly, Personal Adviser to The Queen (Wardrobe), and was also worn by Her Majesty for the official Platinum Jubilee photograph, taken by Ranald Mackechnie the previous week. The official portrait, which shows The Queen at Windsor Castle, will be displayed as part of the exhibition.

Her Majesty’s second Platinum Jubilee ensemble consisted of a vivid green wool-crêpe dress and coat designed by Stewart Parvin, with a coordinating wool-crêpe hat by milliner Rachel Trevor-Morgan. Her Majesty wore the outfit when she appeared on the Buckingham Palace balcony following the Platinum Jubilee Pageant on Sunday 5 June, marking the end of four days of celebrations across the United Kingdom and Commonwealth.

Also on display for the first time will be The Queen’s Diamond Jubilee ensemble, worn to the Service of Thanksgiving at St Paul’s Cathedral and a luncheon at Guildhall, City of London, as part of the celebrations on 5 June 2012. The ensemble was designed by Angela Kelly and consists of a pale turquoise dress and coat embroidered with scattered silver flowers, with a coordinating hat embellished with chiffon and diamanté.

To attend the Service of Thanksgiving for the Golden Jubilee in 2002, Her Majesty wore a blue silk-crêpe coat and dress by another royal couturier, Sir Hardy Amies, who first began designing clothing for The Queen in 1955 and was renowned for his impeccably elegant tailoring. The ensemble was completed by a hat designed by the milliner Frederick Fox. 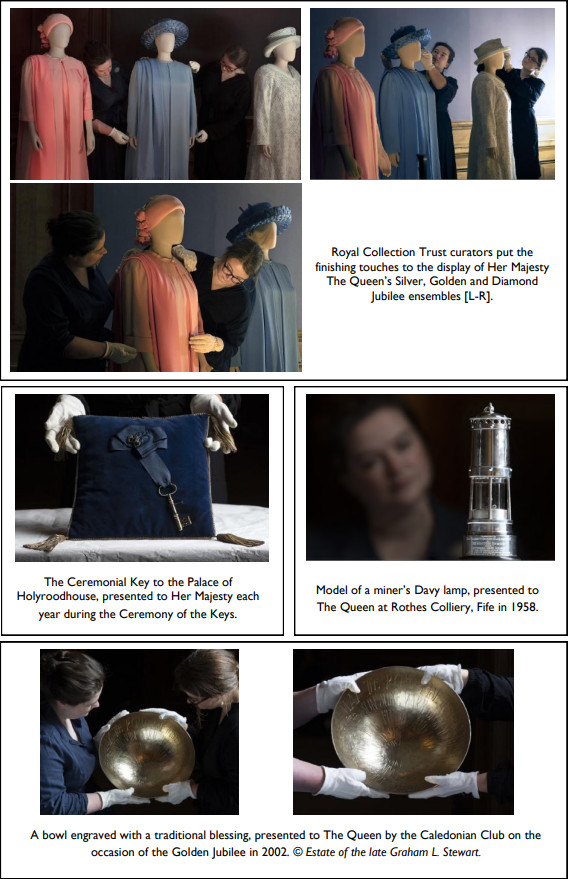 Her Majesty also chose an outfit by Sir Hardy Amies for the Silver Jubilee in 1977, when she wore a striking dress, coat and stole in pink silk-crêpe and chiffon. A matching hat by Frederick Fox featured a cascade of bell-shaped flowers hanging from the back. A crowd estimated at one million people watched The Queen and His Royal Highness The Duke of Edinburgh travel from Buckingham Palace to St Paul’s Cathedral in the Gold State Coach, with a further 500 million watching on television around the world.

Alongside the ensembles worn by The Queen, visitors will see a group of works relating to Her Majesty’s first official visit to Edinburgh, just 20 days after the Coronation at Westminster Abbey on 2 June 1953. During this visit, there was a Service of Thanksgiving at St Giles’ Cathedral and the Honours of Scotland, the country’s Crown Jewels, were presented to the new monarch. Items on display will include a copy of the Official Souvenir Programme from the Edinburgh celebrations and a selection from a set of goblets presented by the High Constables of the Palace of Holyroodhouse during the visit. The goblets are engraved with The Queen’s Beasts – heraldic emblems that include the Unicorn of Scotland and the Dragon of Wales.

Each summer, The Queen spends a week visiting various regions in Scotland, in a celebration of Scottish culture, achievement and community known as Royal Week or Holyrood Week. The week always begins with a ceremony on the forecourt of the Palace of Holyroodhouse known as the Ceremony of the Keys, in which Her Majesty is welcomed into the city of Edinburgh and offered the keys to the city and to the Palace. This event most recently took place on 27 June 2022, and visitors will be able to see the silver-gilt Ceremonial Key to the Palace of Holyroodhouse that was offered to Her Majesty as part of the display. 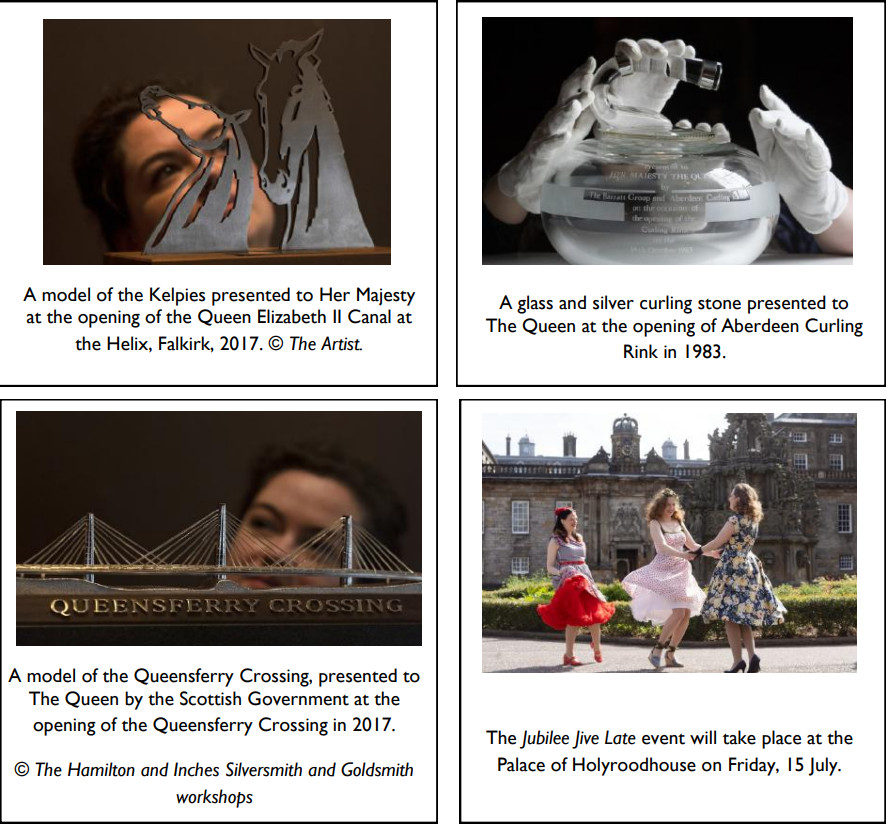 The Queen has undertaken several thousand engagements in Scotland and in support of Scottish causes since the beginning of her reign. The display includes a wide range of gifts presented to Her Majesty during these engagements, including a silver model of a miner’s Davy lamp, presented in Fife in 1958 when The Queen made her first descent into a working coal mine, and a silver bowl engraved with a traditional blessing, presented by the Caledonian Club on the occasion of the Golden Jubilee in 2002.

To continue the celebrations in this Platinum Jubilee year, a special after-hours event will be held at the Palace on Friday, 15 July. The Jubilee Jive Late will take visitors back in time to the early years of The Queen’s reign through 1950s music, dance and fashion. Live performances will bring the Palace to life, with records spun by a gramophone DJ, a live jazz band and jive demonstrations. Fifties fashions are encouraged and vintage hairstyling experts will be on hand to help complete any outfit. Attendees will have the opportunity to enjoy the Palace in the summer evening light and explore its historic State Apartments, as well as enjoying short curator talks about the Platinum Jubilee special display.