During our present lock-down, cycling is one form of exercise that has been allowed by the government, with all due care and attention for social distancing that comes with it of course. Whether you are able to get on a bike, or be lucky enough to have an exercise bike at home (or might even be resorting – safely – to doing exercise using ‘cycling’ movements) – at one point or another in our lives most of us have had a go at riding a bike. The sense of freedom of riding about is a precious memory right now.

We are going to look at a bit of cycling heritage in the borough. There is quite a surprising amount of information – too much for one daily post, so we will come back to Part 2 later. For Pedal Power Part 1, we are going to look at some vintage cycles. Not as vintage as these two in our photographs below – the first showing Billy Mudge one of Tottenham’s first motorists (he had a car-hire firm) but seen here on his bone-shaker, which was certainly out of fashion when he was cycling down Tottenham High Road in c.1950. The second shows a very fashionable couple by contrast on a tandem (all very modern really at the time) cycling by Noel Park Station in Wood Green c.1900:

We are focussing on three main memories today – two that maybe only a few might know about, and the other is one that a lot more people will recall fondly. They are aspects that are important for us locally, but they are also nationally-recognised as contributing to our cycling heritage in the UK. There are only a handful of heritage museum and archive collections highlighted in this country which tell the national story of the history of bicycles and cycling, and here in Haringey we can be proud to have stories of national significance based in Tottenham.

The first is about a woman called Pat Hanlon and her bike shop in the High Road in South Tottenham. As Henry Jacobs recalls:

‘Pat Hanlon really stands out as producing some of the finest bikes of the 1950s and later. She was also noted as a successful bike road racer. The shop was known as “Pat Hanlon, Tottenham Lightweights”. I own one of her bikes and it bears the two names. Her shop was one of the ‘go to’ places for hand-built cycles.

In 1959, not long after Pat had opened her shop, I persuaded my parents to order a bike hand built by Pat Hanlon from her shop in South Tottenham High Road. This was to be my Bar mitzvah present at the age of 13 years, and it is today my most treasured possession.

At the time I considered this a minor miracle as our family lived extremely modestly in Tottenham. I  can still recall the frisson of excitement of ordering all the parts separately to my exact specification. The frame was built for my height with lavishly decorated lugs connecting the lightweight tubes in the colour of my choice. The lightweight wheels built by Pat were a thing of beauty and precision. 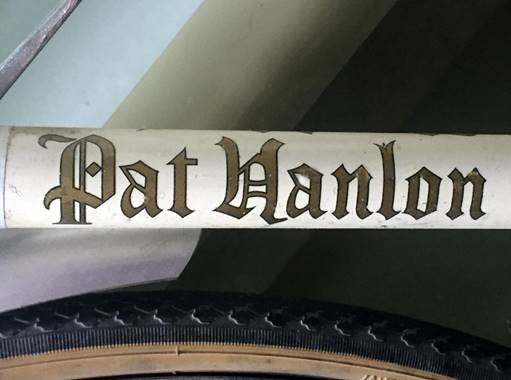 The frame with trademark signature on a Pat Halon cycle. © Henry Jacobs. From the collections of Bruce Castle Museum & Archive. 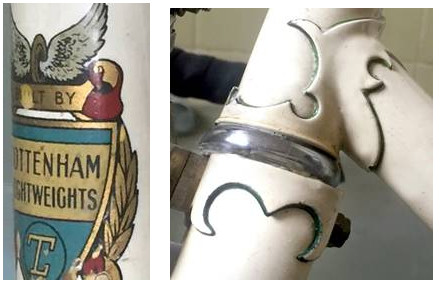 The company name and the distinctive ornate ‘lugs’ on the frame of a Pat Halon cycle. © Henry Jacobs.

From the collections of Bruce Castle Museum & Archive.

I remember the personal interest Pat took in the order which took a few weeks to make. I rode the bike throughout the “Big Freeze” of 1963  when snow was on the ground until March. I still ride the bike and have been stopped several times on the Lee Valley towpath by other cyclists who recognised the name of Pat Hanlon and her heritage.”

Pat’s story can be found, if you look for it, mainly on specialist cycling websites. Those who know and clearly love her bikes would love her story to be more widely known. She even makes it into Sir Alan Sugar’s autobiography as he remembers during the 1960s he visited Pat’s shop describing her as “a legendary woman bike-frame maker.” Over 30 years since she died, Pat Hanlon’s name remains the most hallowed in the cycling world.

“Pat was born ‘Prissie Jane Howells’ in 1915 in Cardiganshire, Wales and grew up a Welsh speaker. On moving to London she took a job as a “Nippy” waitress at one of the Lyons Corner House restaurants. During the Second World War, she managed to get employment at ‘MacLean’s’ a bike shop in Islington, building wheels. This had not been an easy thing to achieve.

As one of her recollections honouring her stated: ‘She discovered she had a mechanical bent instead, through regularly dismantling her beloved bicycle. She took to hovering about the shop, especially on busy Saturday mornings, provoking the “guvnor” to tell her to lend a hand. She did, for no pay, but her real interest was in the old wheel builder in the basement. She used to watch him and beg him to teach her, but, on the grounds that “women don’t do jobs like that”, he refused. It was the Second World War that enabled her to fulfil her dream. With the young men otherwise occupied, one day the “guvnor”, Mr Bailey, barked: “You want to do wheels. You be here Monday morning.”’

At the time it was highly unusual for women to work in mechanics but despite prejudice from many customers not wanting to buy wheels made by a woman she became supremely expert and widely well-known.

In 1959 she opened her shop ‘Pan Halon, Tottenham Lightweights’, originally at 175 High Road, South Tottenham and subsequently moving to 179 High Road. Pat put all her energies into running the shop continuing to build wheels and employ master craftsmen to hand build the frames.

Her name was well known in the 1950s as a road racing cyclist of great ability competing in 90 mile rides and covering 15,000 miles a year on her bike. She used to visit her parents in Somerset by bike, incredibly doing the return journey in a weekend.

After some years in Tottenham, the shop relocated to Bowes Road, Palmers Green. On retirement Pat moved to Majorca, where she died in 1997. Her obituary appeared in the Independent newspaper which stated: ‘Building a bicycle wheel is both an art and a science, which many men fail to master. For a woman to be rated the top wheel builder in Britain was extraordinary.’

© Henry Jacobs. From the collections of Bruce Castle Museum & Archive.

Another local bike shop had a national and world-class reputation – Hetchins cycle shop which was at 780 Seven Sisters Road from 1922 (and later at number 782). Founded by a Russian Jewish refugee Hyman (Harry) Hetchins, he built bikes that were much sought-after throughout  Europe. The bikes were ridden by competitors in the 1936 Olympics and World Championships. Today, Hetchins’ name looms large in the memory of cycle devotees – as can be read here. Sadly, we don’t have a photograph of the Hetchins shop – nor indeed a photograph of the Pat Hanlon shop. If you have an original photograph that you own that shows the relevant stretches of the High Road and these shops, we would be delighted to hear from you.

Moving on to another important first in Britain from Tottenham, we are going to journey over to the Model Traffic Area, in Lordship Recreation Ground. It is said to have been the first devised model traffic area scheme for children in the UK.

Doug Pittam born in Wood Green, was interviewed in 2005 and remembers the following from his childhood in the 1930s and 40s:

“There used to have an area in there [Lordship Rec] devoted to roads and these pedal cars. You used to learn the Highway Code in this area – it was, I suppose, a playground really. They had all the roads, the dotted lines, double dotted  that you had to pull up with the minor roads to go into major roads. They had traffic lights as well. Very good that was actually.”

Older people will recall it especially from the 1950s when bikes were hired for 1d. During the summers of the 1950s Henry Jacobs can remember the Model Traffic Area thronged with children and working traffic lights adding to the excitement. A view of it is shown below in 1951. 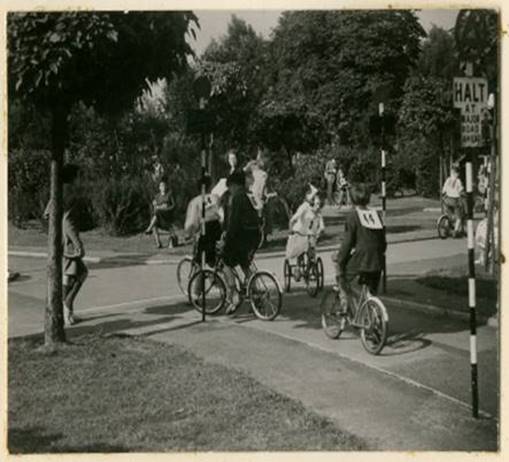 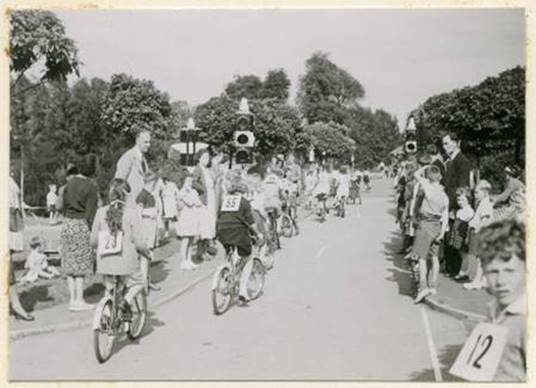 To read the whole story from the people who helped make its restoration happen in 2012 so that we can all enjoy it today, do go to the Friends of Lordship Rec webpage. You can also read the inspiring story of Rockstone Cycling Hub here, run by Rockford Copestone and Clifton Goldson who are the ‘go-to’ place nearby at the Rec, catering not only as a bike repair workshop but also interested in repairing communities too, by working with community initiatives for young people from the area.

And for those who are wanting something a bit faster than a children’s bike or pedal car, then take a look at this short film of the Round Britain Cycle Tour in 1959 as it heads off from Alexandra Palace and on through Muswell Hill.

With thanks to Henry Jacobs for sharing the history of his bike today!

Enjoy reading our stories and watching the short film clips.

Stay well, stay indoors – and if you are out on your bike, take care.