June 30, is the last day of Pride Month, the month that our LGBTQ+ communities celebrate, protest and raise political awareness as well as commemorate the steps made in social justice and human rights. Pride Month is celebrated world-wide through events, festivals, talks and performances, often culminating in a street parade or march. June has particular resonance for LGBTQ+ communities as it was when the Stonewall Riots took place in 1969 . And because of this significant event, the month has been associated with LGBTQ+ celebrations and protests.

London’s showcase Pride parade, which attracts around 1.5 million people to the City from all over the UK and around the world, would normally have been held this past weekend on Saturday, but of course was cancelled this year due to Covid-19 restrictions. Instead, in these trying and difficult times, LGBTQ+ communities have still got together using different and inventive platforms to connect with people and share their messages of inclusivity and equality. 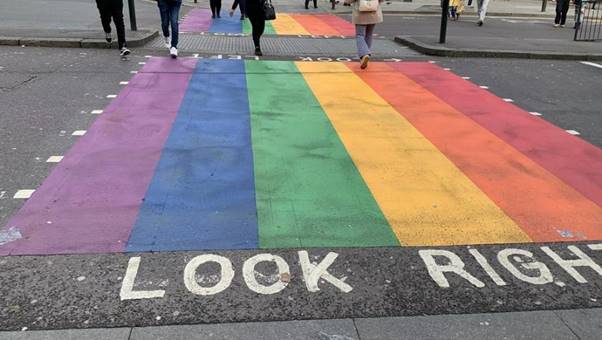 This is one of the two Rainbow Crossings in Haringey, installed by Haringey Council in February 2020 as part of LGBT+ History Month, on Wood Green High Road (outside the Hollywood Green/VUE Cinema at Spouter’s Corner). The first Rainbow Crossing was painted outside the front of Woodside High School in Wood Green, as their public commitment to “diversity, equality and inclusion”. Here is a film about LGBTQ+ awareness that the school did as part of LGBT+ History Month.

In Haringey we have a long and rich history of supporting LGBTQ+ communities and the fight for equality. As part of Haringey Council’s commitment to celebrating the borough’s diverse communities council staff marched at Pride in London for the first time in 2019, teaming up with community groups from the borough to celebrate Haringey’s amazing LGBTQ+ heritage.

Haringey itself has been the site of rallies and protests supporting LGBTQ+ rights from the 1970s through to today. Look at this link for Haringey’s timeline of LGBTQ+ moments. Our archive collections at Bruce Castle hold a range of items such as badges, flyers and posters that were produced from these various campaigns, alongside photographs and newspaper articles as records of that time. The collections tell us about our LGBTQ+ history and communities – including events, local and national protests and personal stories from those protesting and campaigning for equality. The archives also hold information about the many organisations who offer support and guidance and are based in the borough, such as LGBTQ+ BAME arts charity Wise Thoughts. 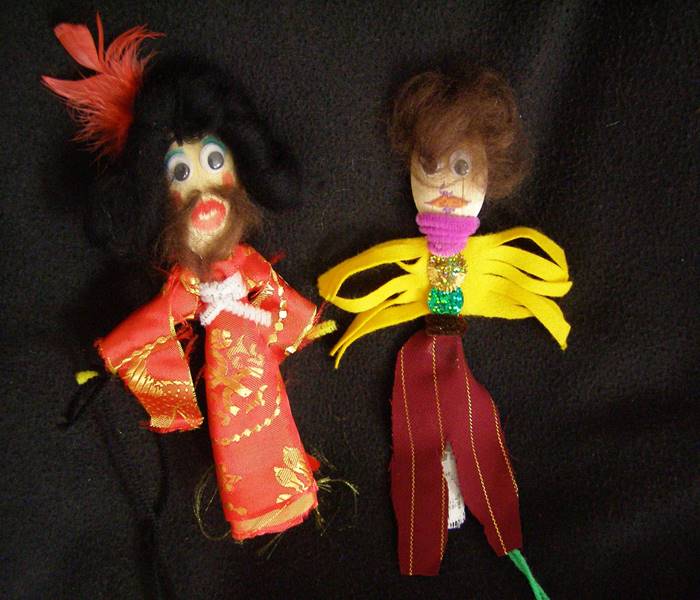 These two Molly Spoons (above) were created as part of a heritage partnership project funded by Share Academy – The Molly Spoon Archive in 2014 – which explored and celebrated LGBTQ+ identity and heritage in Haringey, culminating in an exhibition at Bruce Castle. It brought together artefacts, archives, memories and stories alongside the making of ‘Molly Spoon Dolls’ which were added to our collections.

The badge below is also in our collections at Bruce Castle , was from of the protests against Lord Halsbury’s amendment to the Local Government Act 1986. The Bill, known as Section 28, was enacted on 24 May 1988 and made it illegal for local authorities and schools to intentionally promote the acceptability of homosexuality. After continued campaigning, the Act was finally repealed in England in 2003. 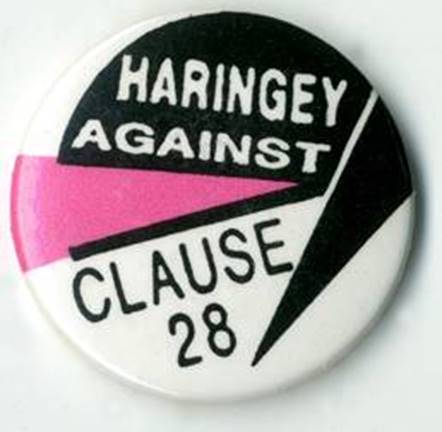 In 2018 a Haringey Pride event was held on Duckett’s Common to commemorate and honour the people who campaigned for LGBTQ+ rights and the protests against Section 28 held in the borough 30 years before.

This year’s Pride theme was You! Me! Us! We! and asked people to support, understand and become allies for the LGBTQ+ communities. 2020 was also a significant year for London’s Pride, as it was the 50th anniversary of the first LGBTQ+ march in London held by Gay Liberation Front in 1970. A small, celebratory march was carefully organised and managed with social distancing. The original protesters who marched 50 years ago were mostly over 70, and some were vulnerable and had until recently been socially isolating due to Covid-19.

Although the main London Pride parade was cancelled, 2020 will be remembered as a year of protest, when thousands marched last weekend aligning Pride with the global BLACK LIVES MATTER Movement .

Haringey is proud to such have a varied and interesting LGBTQ+ heritage. Since 2018, the Haringey Vanguard project has been exploring the history of the borough’s BAME LGBTQ+ community between the 1970s and 1990s. The project is funded by the National Lottery Heritage Fund and is delivered as a partnership between Haringey Archive and Museum Service and London Metropolitan Archives.

The project was developed to encourage people to creatively engage with and be inspired by archives and collections already at Bruce Castle and to collect and add more to the archive. Over the past two years, oral histories have been recorded and collected from key people within the community, as well as material such as photographs, posters and newspaper cuttings, all telling the various stories of Haringey’s BAME LGBTQ+ heritage. 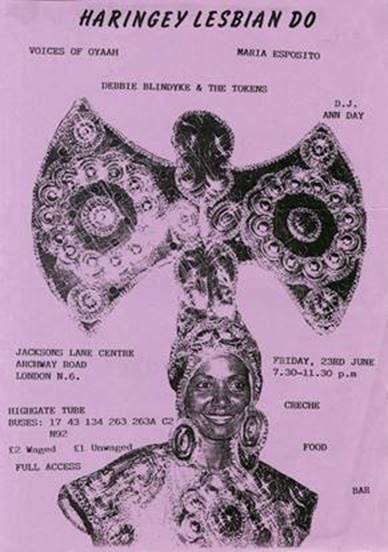 Poster for the ‘Haringey Lesbian Do’ at Jackson’s Lane Centre (date unknown).

As a very special guest writer for today’s post, we have asked Veronica McKenzie, Haringey Vanguard’s Community Engagement Lead Project Officer, to share some thoughts about how the BAME LGBTQ+ community is engaging, reacting and supporting each other in these exceptional and difficult times.

This year the devastation of Covid, particularly on the Black and Asian communities, has left many of us feeling vulnerable, and suffering losses due not only to the disease, but to the ongoing underlying health inequality now laid bare.

We reacted with an outpouring of solidarity for the family of George Floyd, for the many who had been killed before and after him. To see the world unite around a simple statement BLACK LIVES MATTER was a profound moment in history. And one of the most interesting aspects is that people are now questioning history, interrogating what they thought to be true.

History shows us that LGBTQ+ people have always been present in the struggle for racial, and sexual equality, whether that be the Civil Rights movement in the US, or the Suffragettes. Gay Pride started as a protest.

It’s important to document these moments of change, so we don’t lose the clarity of who took part. A great example of erased history is that of Bayard Rustin, a black gay man, who influenced Martin Luther King, and was acknowledged only recently. Likewise, in the UK a founding member of the group that started Stonewall was Olivette Cole Wilson, a black lesbian. Black LGBTQ+ activists were instrumental in forming radical legislation that led to the Changing the World manifesto, paving the way for equal rights for the LGBTQ+ community forty years ago, and Linda Bellos was chair of the London Strategic Unit, which authorised Black History month in October 1987. 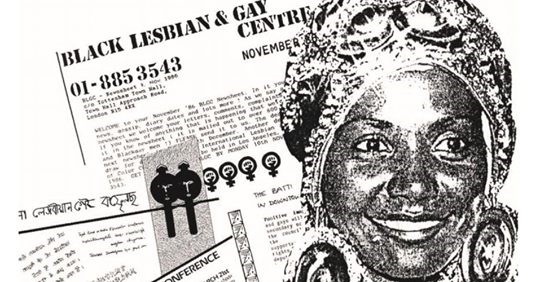 I pick out these individuals because their actions led to wide ranging changes in society, and challenges narratives that omits or minimises the contribution made by black LGBTQ+ communities, or even more troubling, pushes narratives that try to pit our communities against each other.

Covid-19 means we couldn’t attend any Pride events this year, and though there has been lots online, we took the opportunity to reflect on the past year and to think about the true meaning of Pride and Black History Month.

For heritage projects like Haringey Vanguard, a Black and Asian LGBTQ+ History project, this communal remembrance and conversation is vital to the preservation of our histories. The oral histories and materials we collect will go into an archive knowing it will inspire, inform, and provide context to whoever accesses the collection in the future. 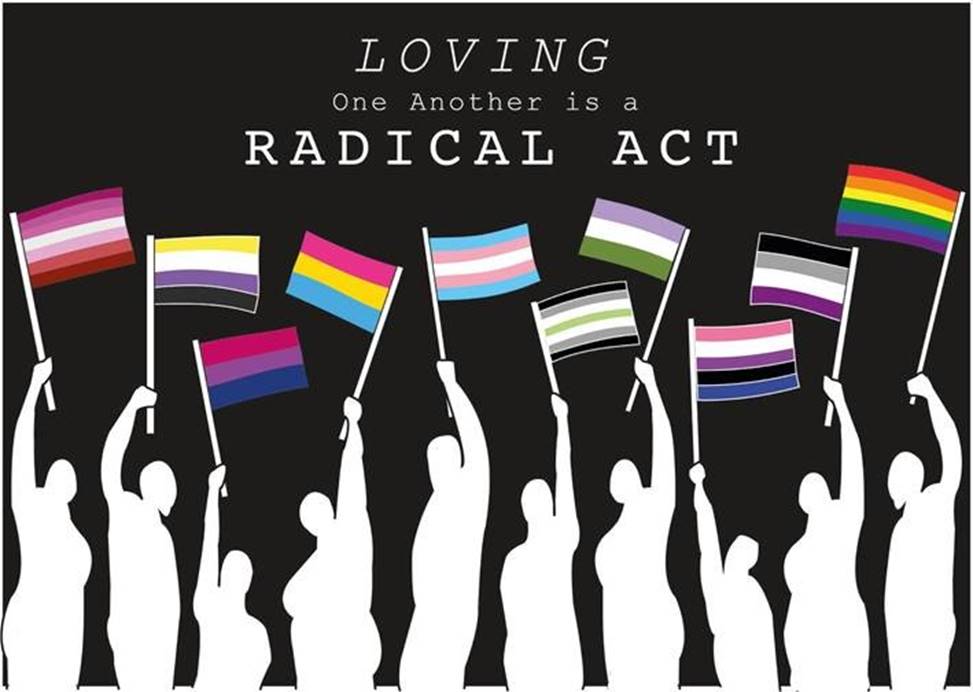 2020 and all that has happened has shown us that we have to show up, stand up, and consider what connects us to each other. We will soon be back to celebrating Pride, hopefully later this year. But in the meantime, let’s take a moment to take stock as we are seeing that history is not set in stone – it is an ongoing conversation. Making use of local archives, joining local history groups or simply following one of the many historians on social media, is one way to better understand the world.

We are happy to be working with both heritage partners – the London Metropolitan Archives and Haringey Archive and Museum Services based at Bruce Castle Museum – alongside our volunteers to carry out this work.

Though Covid-19 means we can’t meet with our volunteers right now, we look forward to the time when – in the words of Vera Lynn – we’ll meet again!” 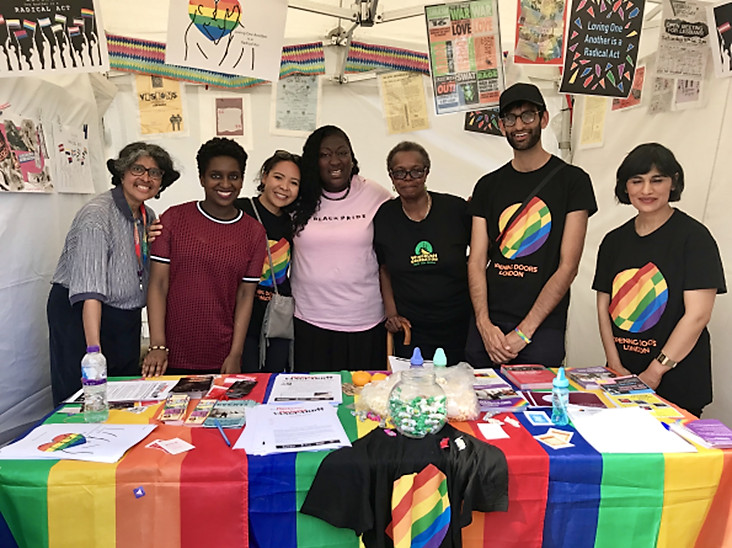 If you are interested in volunteering or have any photographs or flyers or badges that you can add to the Haringey Vanguard archive at Bruce Castle, please contact us on [email protected] or @Veronica McKenzie  “

And on this last day of Pride Month 2020, we thank Veronica for her invaluable contribution for today’s post – and for all her work for Haringey Vanguard – and for helping us think and reflect. And as Veronica says, let’s learn from our history and look towards our local collections and archives for our communities, as one way to better understand our world.