Huff and puff up Highgate Hill

If you are a very keen cyclist, you may well have checked out the more challenging inclines in London. Although not known particularly for its hills, London does have some really tough climbs if riding a bike (or even walking for that matter!). And not surprisingly most of the steep hills are located in and around Haringey. If we take the London Cyclist as our guide, it suggests that Muswell Hill is probably the hardest in our area with an average gradient of 11%. But it is the steepness of Highgate Hill that we will be focussing on today, at 0.9km long with an average gradient of 10% but peaking at an even tougher 12.9%. 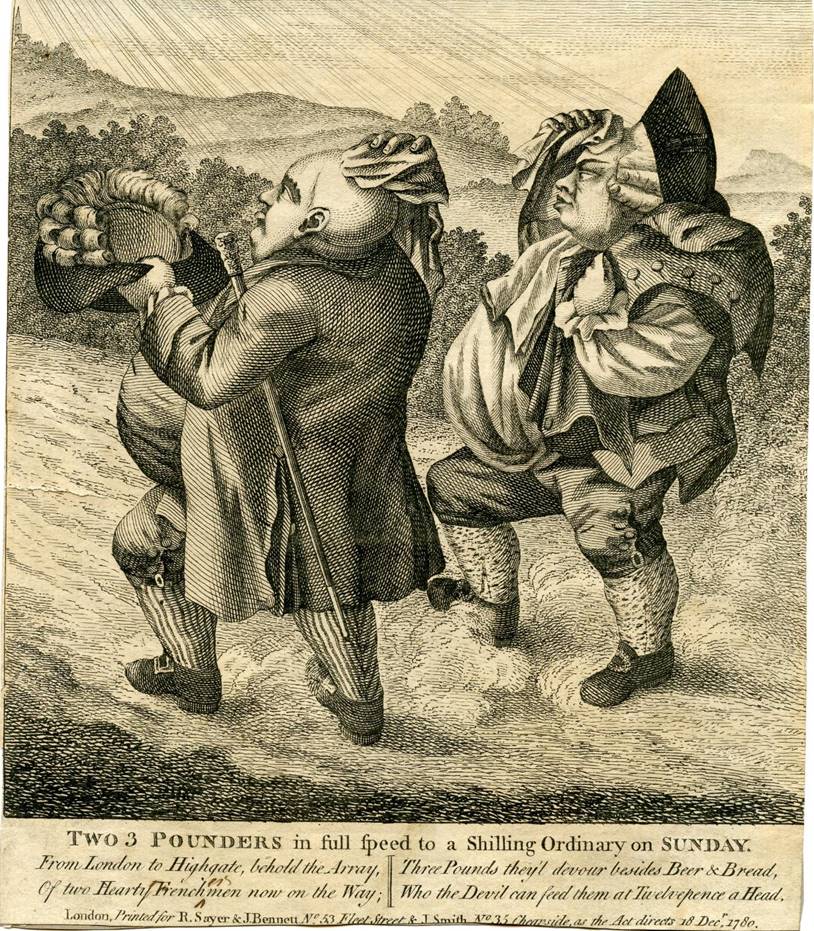 Back in 1780, these two ‘cits’ or City gentlemen were talked about for their very long trudge up Highgate Hill in this published satirical print. It would seem they are pounding up the hill as quickly as they can – raising dust clouds in the process whilst mopping their brows and head – to ensure they get to the tavern in time to claim their 18th century equivalent of a ‘meal deal’. The legend below says:

“ Two 3 Pounders in full speed to a Shilling Ordinary on Sunday.

From London to Highgate, behold the Array,

Of two Hearty Trenchermen now on the Way:

Who the Devil can feed them at Twelvepence a Head. “

We hope they got there. It would seem getting up Highgate Hill by whatever method or mode of transport posed a bit of a challenge, as you can see in another satirical print from 1785 of a couple toppling out of their carriage – just click here to view it in the collections of the British Museum.

Jump to 1912 and in this view of Highgate Hill (below) you can just spot someone pushing their bike up the hill. But in the distance is a more dependable and easier mode of travel – a reassuring electric tram.

But it wasn’t always like that. In this familiar view (below) of Highgate High Street by Charles Martin, you may think that is a tram in the middle of the road – but look more closely and it is in fact something a little bit different. 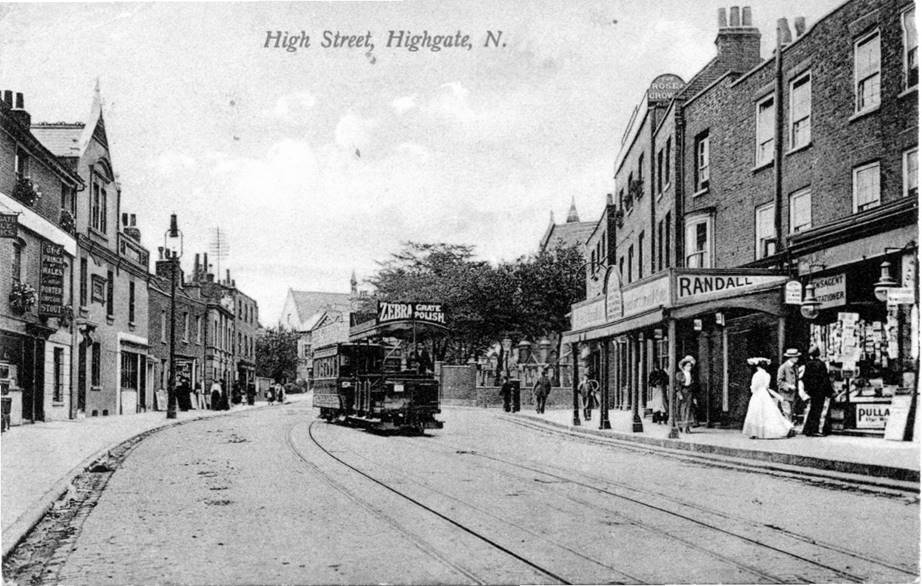 It is the Highgate Cable Tram. Sounds like the cable cars of San Francisco? Well, that’s exactly right. You can take a look at these two short films of the great cable cars on the tourist landscape of San Francisco, one a short history and the other a trip by cable car. (And having been to San Francisco myself, choosing the very popular cable car option over the 20% gradient of some of the hills there was not a hard choice to make!).

On 29 May 1884, the Highgate Cable Tramway was opened by the Steep Grade Tramways and Works Company as Europe’s first ‘cable car’ following the successful debut of the San Francisco system. It was originally designed by an engineer from San Francisco, but moved onto another American engineer, William E. Eppelsheimer. Like the San Francisco system, the cable trams were connected to an underground moving cable, some 8,000 feet long.

There was much celebration locally for people living at Highgate when it opened, as Archway had already been linked up by horse-tram to the City (in 1873) and the West End (in 1882). The poor horses just could not cope with pulling the horse-trams full of people up such a gradient to the village at the top. 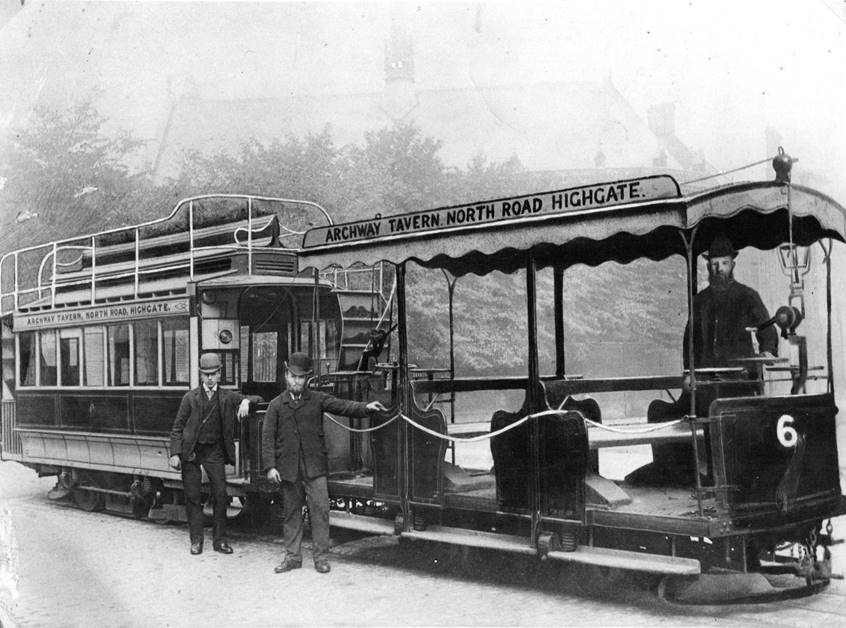 The photograph above shows what is likely to be one of the first cable cars (described as Tractor Car 6) in use on Highgate Hill, and was probably taken not long after the system opened in 1884. The specialist website British Tramway Uniform and Insignia has a page dedicated to the history of the Highgate Hill Cable Tramway. They identify in this picture that the two men standing outside the car are the “conductor (possibly but not certainly) and another unidentified individual, both of whom are wearing informal attire. The conductor’s PCO badge can just be made out hanging from his cash-bag strap at the bottom of his jacket.” As Michael Hammerson (Highgate Society) has also said of his photograph (above), you can see just behind the cable car, standing at its terminus, the old Highgate School churchyard at the end of Southwood Lane and, looking high up beyond the churchyard, is the ghostly outline of the Highgate School Chapel. The controls or ‘winding house’ for the cable tramway were in the High Street near the Duke’s Head pub.

Despite the initial fanfare and jubilation of the cable tramway’s opening, and clearly a need for getting up that hill, the line was not as commercially successful as one might have thought, with various companies ending up having operated it. Tragically, a fatal accident occurred after a cable snapped and the runaway cable car crashed. This forced the line to close and the operating licence was not renewed between 1892-1897.

To take a cable car, at the start of operations, the fare was 2d each way. Later on, it was the higher price of 2d on the way up, but cheaper going down at 1d. Eventually it became 1d each way. Companies couldn’t make it a financial success though, as they were set up operationally with a future plan to extend the line, which just never happened. At its peak the cable tramway carried around 680,000 passengers in a year. By 1909 it finally closed, and a new electrified tram system was installed to take its place. A full cable tramway history can be found online here. 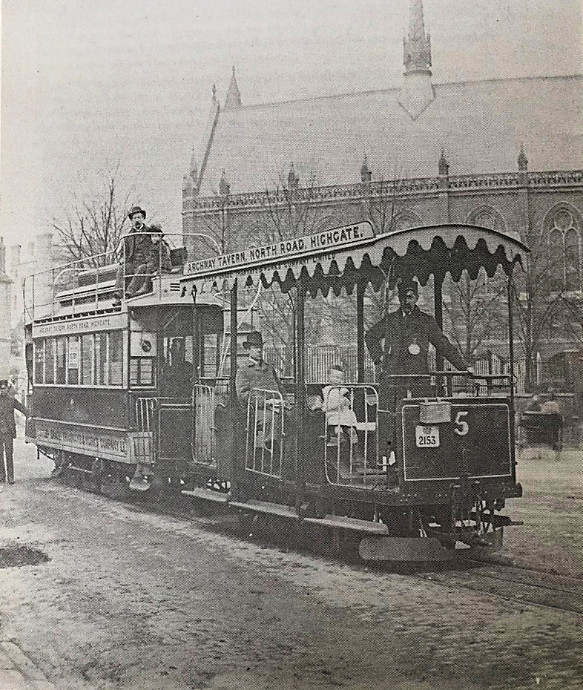 Both specialist websites and Michael have all commented about how few photographs there are of the cable tramway at Highgate Hill. At Bruce Castle we only have two photographic images of it, with one shown above with passengers sitting in the cable car, dating from around 1890. Between the two websites and those shown here in this post, it forms a nice collection of views.

The hill and much of the historic streetscape of Highgate has changed very little of course since the cable tramway was installed over 130 years ago. It can still be a struggle to get up that hill for buses and cars nowadays. When trapped in a hill traffic jam, especially sitting on a bus, it certainly needs good driving skills with the clutch, gears and brake for hill starts. Being stuck on a bus and ‘playing cat and mouse’ with overtaking pedestrians can alleviate the dullness of a hill traffic jam – all the more so when the pedestrian overtaking the bus is the late (and in my view great) George Michael. Stuck in a bus packed full like sardines and having a superstar marching up the hill beside you, was a little bit of a highlight of that particular traffic jam on Highgate Hill for all the delighted bus passengers. Probably not so enjoyable for poor George, who dived into the first restaurant at the earliest opportunity …

And what goes up, must come down. Why not take this fast and short tour of Highgate Hill going down to Archway by following this little film here, as a reminder of how steep it is?