Signs for bakers their shops in Haringey

Old signs for bakers and their shops can be found on our local streetscapes today – alongside new ones. Here’s a familiar sign in the shop window of the large and popular bakery with its tasty treats at ‘Yassar Halim’, 493 Green Lanes, Harringay: 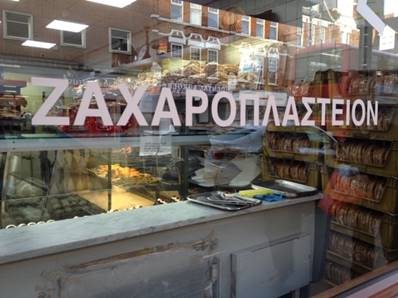 Some of the much older signs that survive are placed high up on buildings, so you really have to look – always best spotted from the top deck of a bus. Some of you might have caught sight of the one in Wood Green along the parade of shops in Lordship Lane, or maybe this one (below) in Philip Lane, Tottenham? 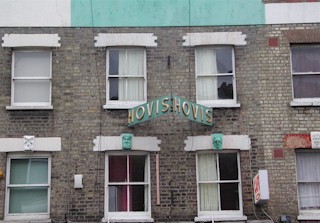 This ‘HOVIS’ sign was once advertising bread sold at ‘Browns Bakeries’. The baker Mr Brown lived nearby at 23a Summerhill Road, N15. Below is an earlier Hovis sign above the baker’s in Philip Lane, seen here c.1910. 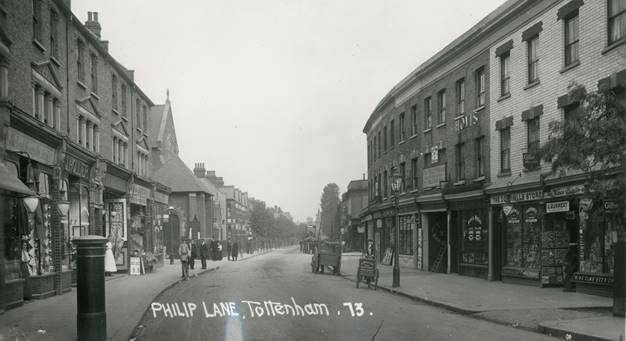 Today we are reliant at the moment on home deliveries, often from independent shops, such as bakers. Looking back not so long ago, some homes had their bread delivered daily. Here is Mr Brown the baker of Philip Lane on his round near Broad Lane and Philip Lane, checking his fresh loaves at his hand-pushed delivery cart. The photograph was taken by Henry Jacobs during the 1970s (in those days Henry took this photograph on a 6×6 cm Rolleiflex twin lens reflex). As Henry mentions as a professional photographer about taking this ‘rare and by chance’ photograph, “you learn to always carry a camera about as you never know what you might come across”. 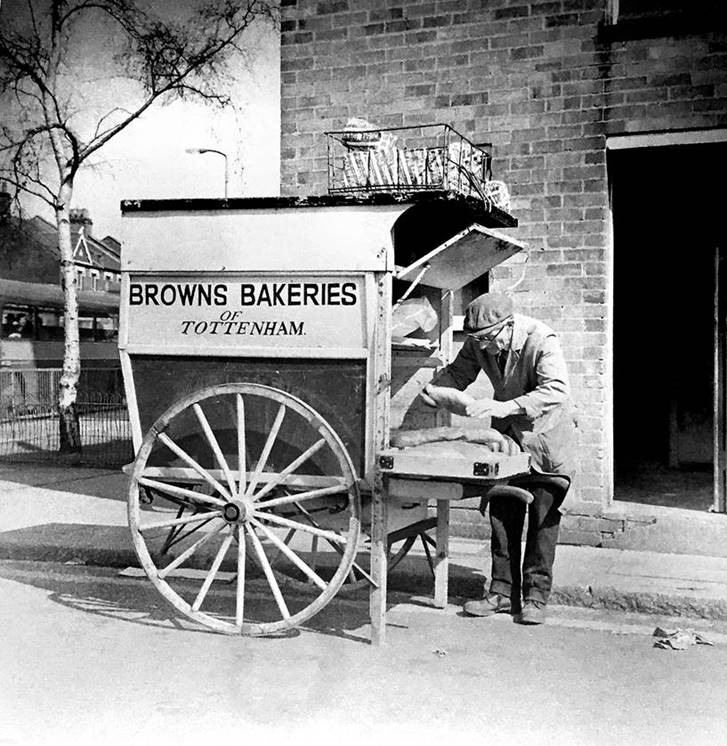 © Henry Jacobs. From the collections of Bruce Castle Museum and Archive

Henry also recollects: “It was common practice for bakers to sell the ‘stale’ cakes from the previous day or two for an old penny in the late 1950s early 60s.”

This memory is one that hadn’t changed much from those of the early decades of the 20th century, when it was an absolute essential for some families to buy stale bread – and sometimes cakes – to make ends meet. We have a number of oral histories that recall going to Luxford’s the bakers at the corner of Scotland Green and Tottenham High Road to get as much as they could for a penny. 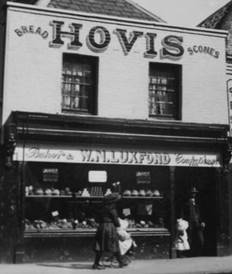 Henry has fond memories about Gray’s the baker on the corner of Hartington Road in Tottenham. “My next door neighbour Lily in Sherringham Avenue used to work there and it was our family’s local baker. I can remember the smell of the bread, the look of the crusty tops and the warmth of the wall. I had a twice-weekly errand for an elderly lady in my road to get her bread from the shop.” Other reminiscences from our collections recall too the joy as children of warming their backs against the wall of the baker’s when they went out to play.

“ I used to go to queue up on the Saturday morning at Jessop’s bakeries because they baked on the premises, and they did buns and gingerbread-men for the children. That was in Forster Road, not on the High Road [in Tottenham]. “

Other bakers we may miss visiting ourselves today include the Ghanaian bakery Uncle John’s in West Green Road, Tottenham, selling not just bread but delicious patties too. 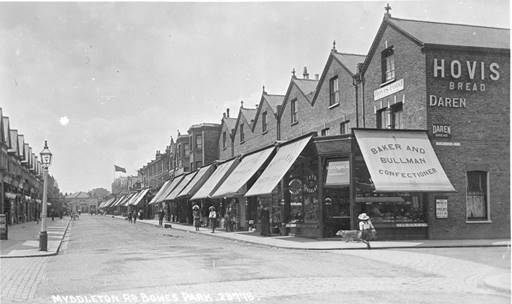 To see and hear more about the baking history of Uncle John’s, just click here (part of a longer film – go to 13 minutes and 30 seconds into the film to listen to his story) or here for a different short clip.

From two different corners of Haringey, we have a baker’s shop on the corner of Myddleton Road and Marlborough Road in Bowes Park, seen in 1906 (above). Whilst at 379 Seven Sisters Road in South Tottenham (below) we have another corner-shop baker’s, from 1949. 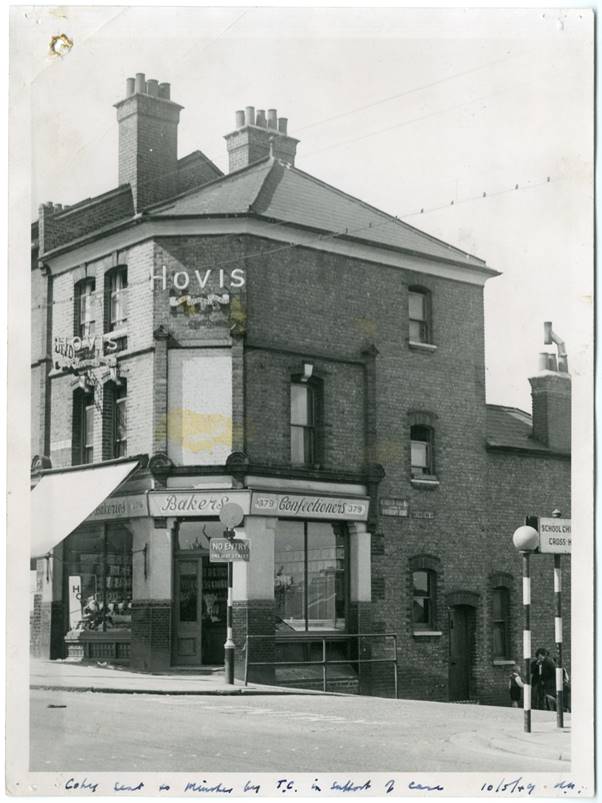 Earlier this year, we celebrated at our annual Local History Fair with baker Christopher Freeman and David Winskill that for 200 years the Freeman family have been baking in Highgate and Crouch End. Landmark Dunn’s the bakers in Crouch End is the oldest business in that area and has been owned and run by Christopher’s family for generations. You can listen to Christopher speaking about his business, with the usual sounds of his busy shop in the background, or read all about this important slice of Crouch End baking history in the articles already written (and also forthcoming) by David, published by Hornsey Historical Society.

What some of you might not know is that Dunn’s bakes the local tray-bake known as Tottenham Cake. This ‘regional speciality tray-bake’ is also sold in a few chain high street bakers in Tottenham and around the country even – or you can try and make your own! Our webpages have different recipes about Tottenham Cake – which are some of the most visited on the council website. Why not take a look at these recipes by clicking on this link? You can also hear the story of the original making of the popular Tottenham Cake with its distinctive pink icing as told by our former Deputy Curator at Bruce Castle – Robert Waite – when he appeared on the ‘Great British Bake Off’ a few years ago.

Moving a bit further along from Tottenham Cake and its connections with White Hart Lane, we are sure many locals will remember the Wonderloaf bakery, that once occupied the site opposite Perth Road where it meets White Hart Lane in Wood Green. Here’s a view of the factory as seen from Perth Road during the 1950s: 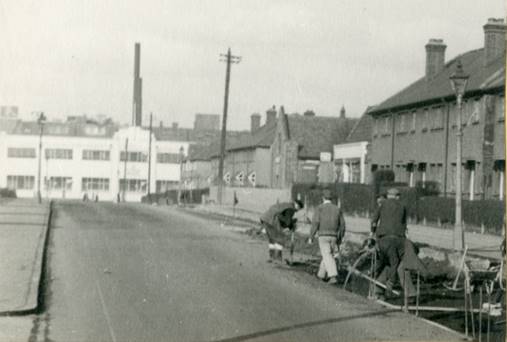 To read the reminiscences of Jim Clark (1925 – 2018) of the time he worked at the Wonderloaf factory during a heatwave.

Or why not take a look at this 1957 film about a Frozen Bread Bakery that was once on the borders of Haringey in East Finchley?

And lastly here is the final photograph from our collection today showing a young woman serving in Taylor’s the baker’s shop in Church Road, Tottenham in 1911. The photographer was William Thomas Camper Atkinson, who lived and had a family shop at 13 Church Road (there will be more about the Atkinson family in later posts). The photography is so clear you can even see the flour labels on the shop shelves behind. 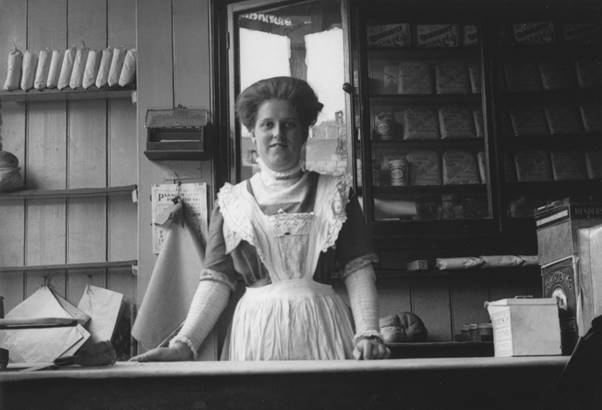 From the collections of Bruce Castle Museum & Archive. © The estate of William Thomas Camper Atkinson

Previous PostDid you know …. Haringey was where cinema first started?Next PostRefugees during and after WWII