Some of you might recall in July last year the premier of Bruce Grove Stories, to showcase a new short film by BBC documentary-maker Alex Jones about the community and neighbourhood of Bruce Grove in Tottenham and a specially-commissioned poem about Bruce Grove by the poet Abondance Matanda. The event highlighted the project to bring Bruce Grove’s landmark public conveniences back to life. The community group The Last Elm, led by Geraldine Turvey, had been founded to save the loos, with the driving aim to restore and revitalise this Grade 2 listed building. 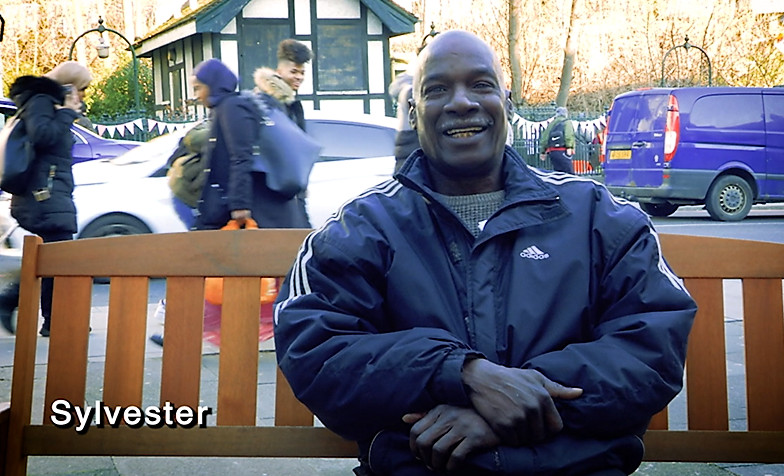 We will come back in a later post to learn more about this heritage project – but in the meantime you can find out more about it here.

Today’s post is our second post on the topic of trees, looking at trees from around the borough. We will be focussing on the choice of name for the community group associated with this heritage project – The Last Elm – and find out why they opted for this name, reflecting on the history of this site of the public conveniences in Bruce Grove. 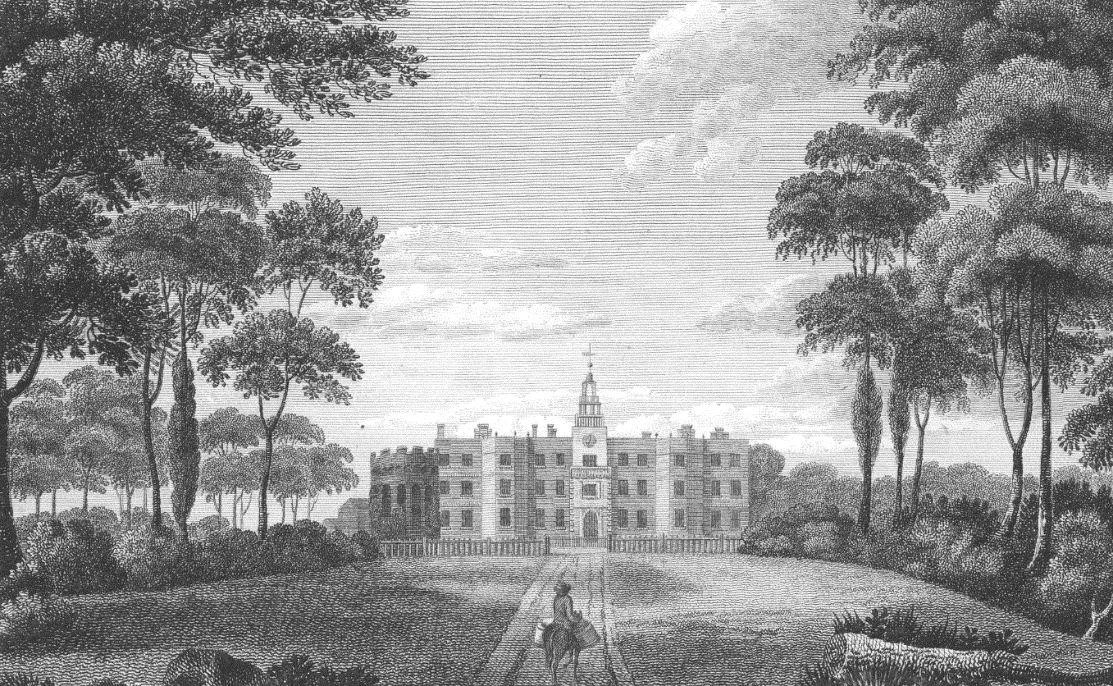 To find out we have to look back to our inherited collective memory of the area, to hear stories and examine documents, maps and pictures. Frederic Fisk wrote his History of Tottenham in 1923, looking back at a time of great change in the area. We will be looking at what he and a few others have had to say about the evolving urban landscape of Bruce Grove, at one point a destination point for travellers in London. First of all let’s hear from Fisk:

“ For over two centuries there was a shady walk between two rows of stately elms, going from Bruce Castle to the High Road. Nothing of this appears in the Dorset Survey of 1619; an old 1793 print gives it with a narrow path [seen above], along which is a man on horseback. Later maps give the walk, which was popular for Londoners (it was common during the 17th century to plant trees forming a grove leading to a mansion. The remnant of a grove is in front of Downhills). 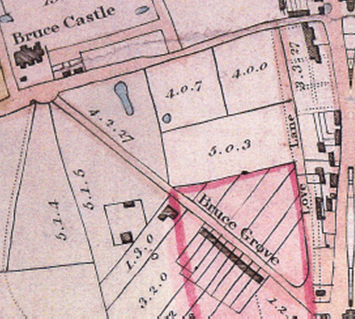 Detail showing the shady walk of Bruce Grove, as seen on Wyburd’s Survey of Tottenham in 1798 (published 1818)

Bruce Grove was formed along a part of this walk – from the High Road to the present Hartham Road – the remaining narrow portion was called Crow’s Walk, as seen in the photograph below. 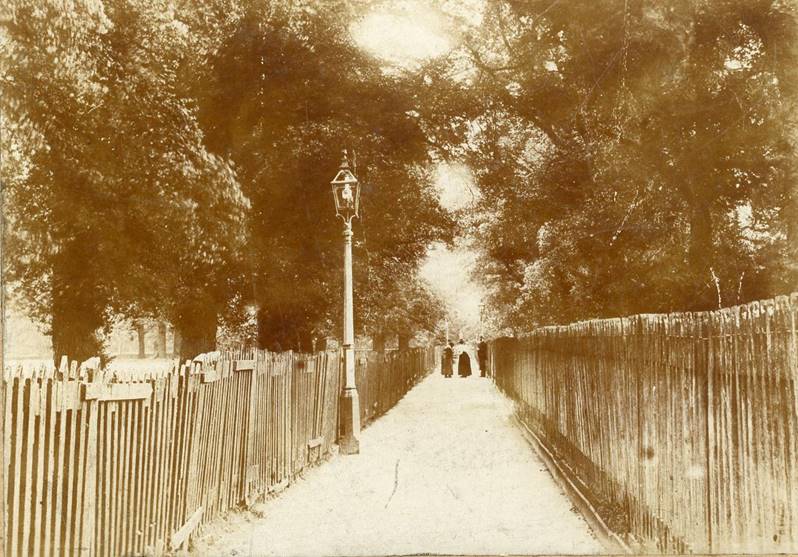 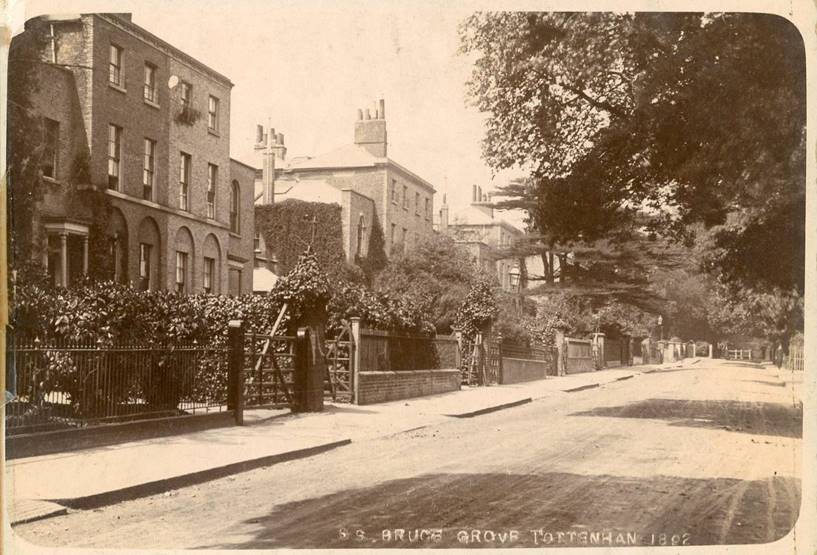 Bruce Grove in 1892. You can just see at the far end the narrowing of the road into Crow’s Walk 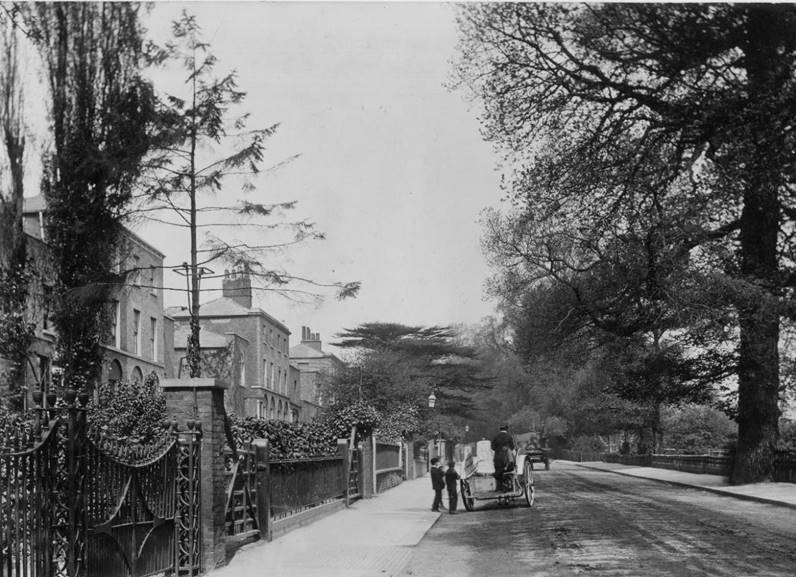 The early houses were erected on one side only of the Grove, and numbered sixteen, nearly all being occupied by ‘Friends’. This spot was one of the most beautiful for many miles. The writer of ‘Suburban Homes of London’ (1881), says:

“You may trust the ancient election of residential property by the society of friends as the best criterion of excellence, and you may look at the rate-books of Tottenham for the last 200 years, and find ‘not a few’ as the shrewed and good people.’

Not only were the old elms in Bruce Grove a famous North London bit of scenery, but equally famous were the many hundreds of rooks, or crows – (it was never settled which, as the birds are much alike) – that had their nest and homes amongst the leaves and branches of the trees. These birds, with their continual, daytime and evening, caw, caw, interested not only Tottenham folks, but were a fascination and wonder. How long the rooks had founded a colony here is not known (they were also in Bruce Castle Park), but about 40 years ago they began to find ‘lodgings’ elsewhere, until none remained in Bruce Grove – although some stayed at Crows’ Walk. As the reason for this migration was not known, the inhabitants of Tottenham were hurt. [The common suggestion was that it was the smell from the poorly maintained drains that forced them to fly away!]. 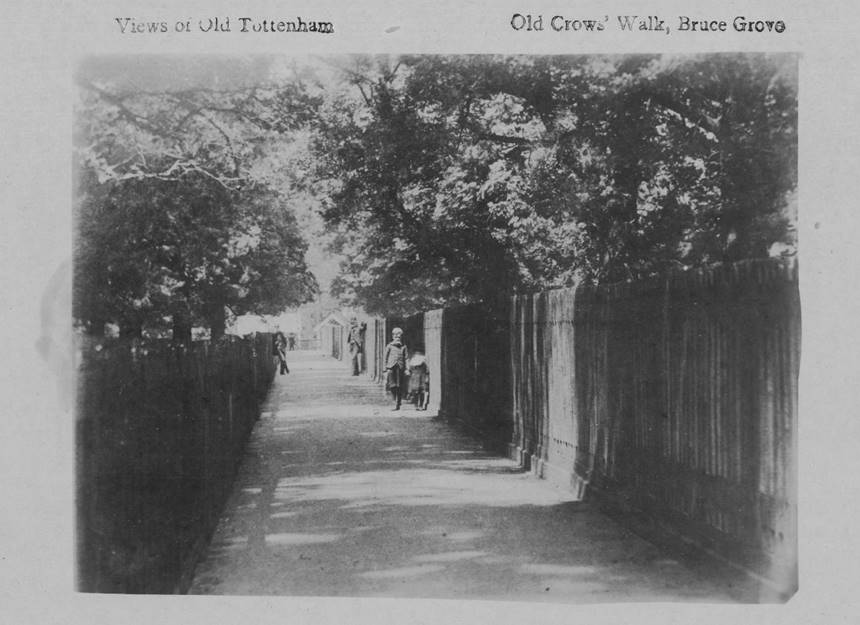 And here is another view on Art UK, painted by one of the seven Hibbert sisters of Tottenham.

“This Grove was up to a few years ago one of the prettiest spots not only in Tottenham but for many miles around. Robinson in 1840 gives the following account of this Grove:

‘ When the late Mr. Thomas Smith purchased Bruce Castle [in 1792], with the land opposite, called Lords Mead, and Langford Lands, there was a shady walk between two rows of stately elms, the growth of more than two centuries, leading from the front entrance of the Castle to the High Road, nearly opposite to the tavern known by the name of the George and Vulture; from this circumstance it was then called the George and Vulture Walk. Mr Smith let the greater part of Langford Lands out on building leases, and several handsome houses were built on the south-west side of the walk, which is now called Bruce Grove from its contiguity to the Castle. This grove forms one of the most desirable places of residence in the parish; it is well watched and lighted at the expense of the inhabitants, and contains about sixteen house, principally inhabited by the Society of Friends.’ 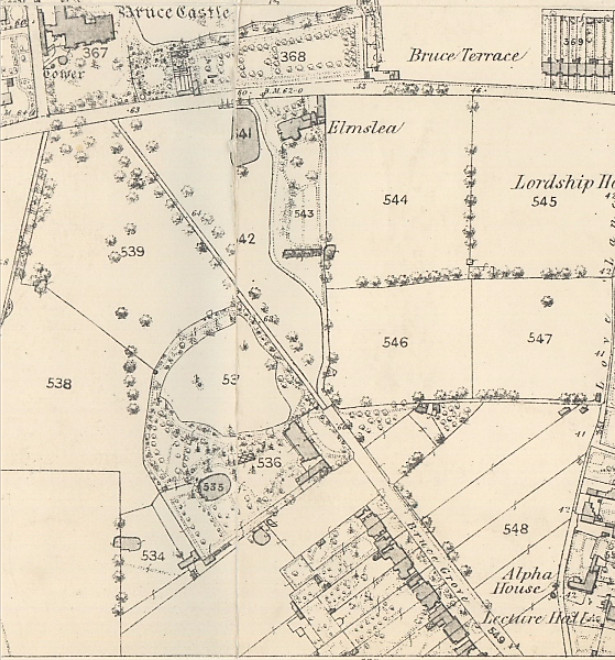 Detail from OS map 1864, showing Bruce Grove. The row of Georgian houses are very distinctive lining the wider part of the road, before it narrows as it approaches Bruce Castle at the top. Further up the road the unnamed large house (with the number 536) is ‘Elmhurst’, whilst in Lordship Lane is the big house of Elmslea.

Moving onto the details remembered by Mrs Couchman in her Reminiscences of Tottenham (1909):

“ Mr William Fowler’s house at the end had beautiful grounds, the meadows extending to the end of the narrow walk leading to Bruce Castle. Flocks of crows made their nests and found shelter in the trees there. It was so peaceful, with fields on either side, with a low open railing. The only sound to be heard was the caw, caw of the rooks, who always seemed as if they had something important to discuss, and they left off reluctantly when their bedtime came. “ 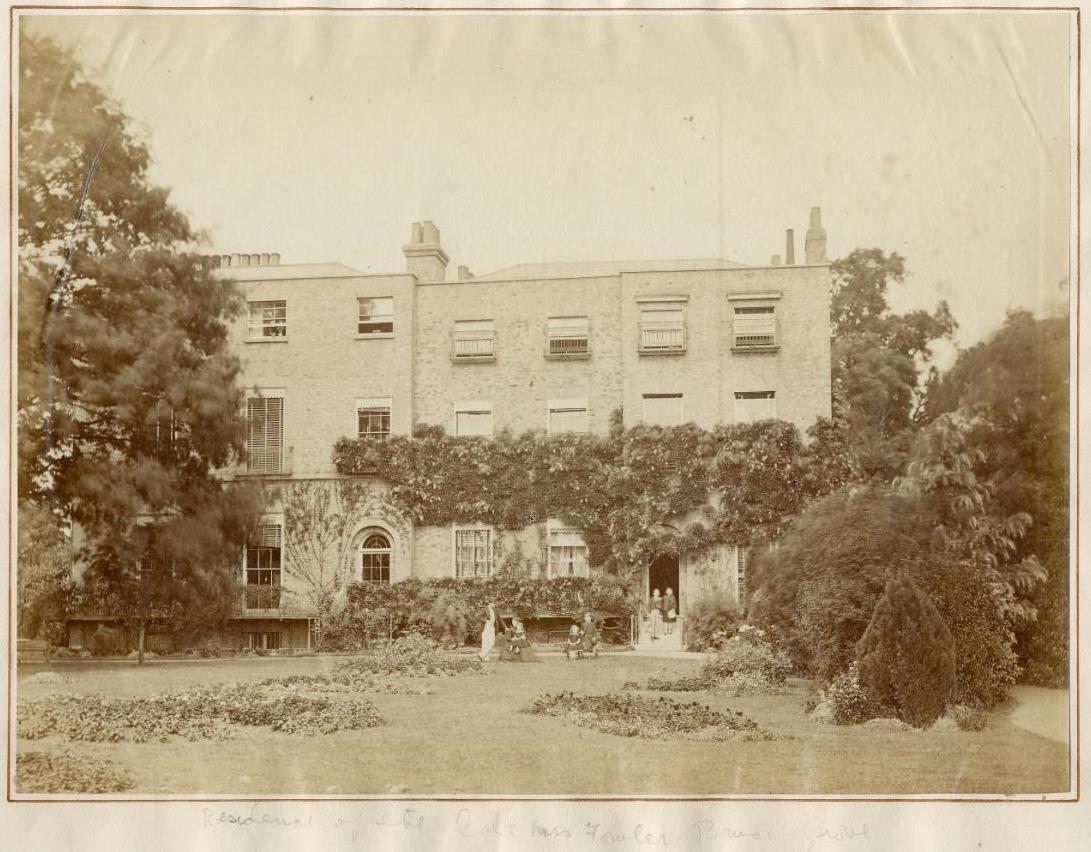 View of the gardens and rear of the house of the late Mrs Fowler, which was situated at the end of the row of fine Georgian houses in Bruce Grove, described as ‘18’ Bruce Grove in contemporary records.

Before continuing with Mrs Couchman’s memories, below are a few different scenes of Bruce Grove and the elms, taken by eminent photographers and artists from Tottenham: 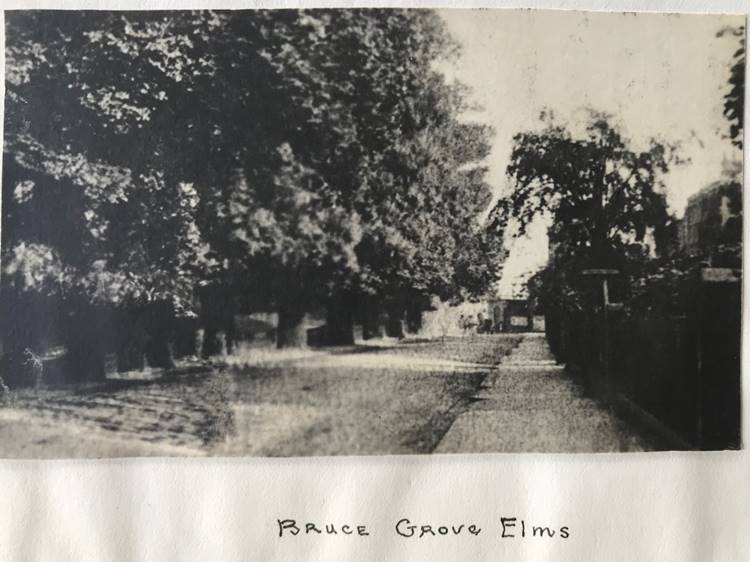 Photograph of the elms taken by William Dillworth Howard (WDH), probably c.1875, as it looks like the railway bridge is already there at the end of Bruce Grove and the train line had been there since 1872. WDH was the son of John Eliot Howard of Lordsmead and grandson of Luke Howard, the namer of clouds who lived in Bruce Grove.

Courtesy and © the collection of Stephen Lloyd (Howard family) 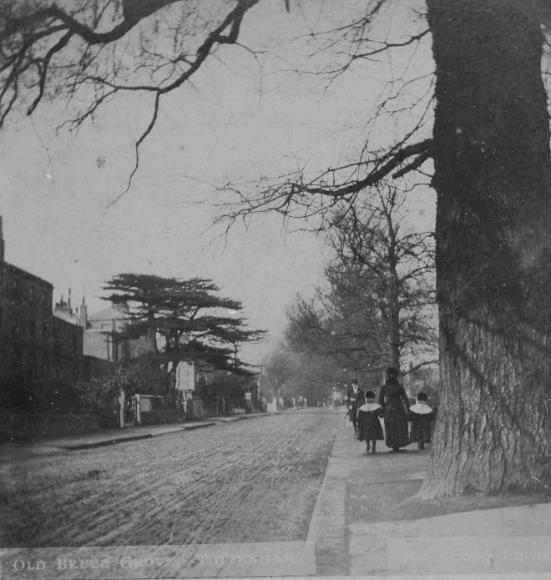 View looking north of ‘Old Bruce Grove’ taken by one of the Hunnings family, local professional photographers and printers, c.1890 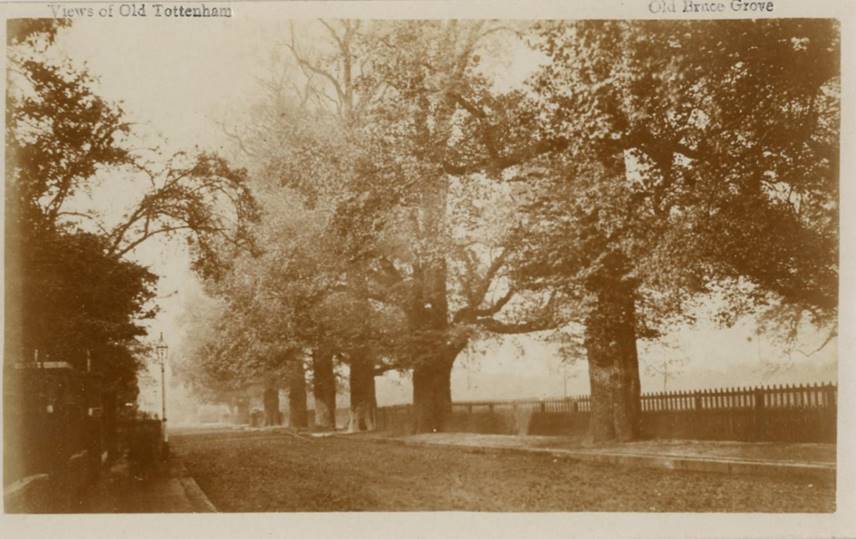 This photograph was taken from the side of the Georgian houses looking across the road towards the elms, and made into a postcard sold by Fred Fisk, c.1890 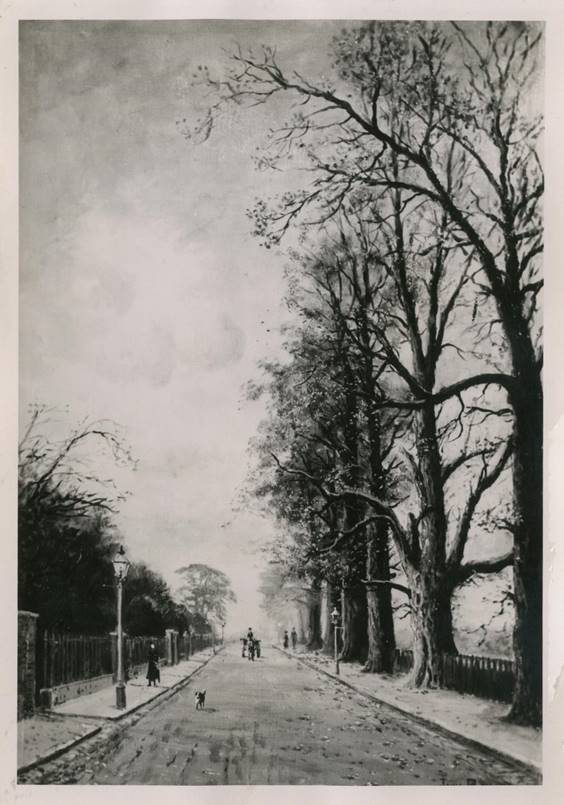 Photograph of a painting by the artist John Bonny of the Bruce Grove elms, c. 1890-1900. Edith Hibbert also painted her own view of the elm trees in Bruce Grove to accompany her painting of Crow’s Walk, both on the Art UK. website

“ On one side was a row of very old and noble elm trees. By the side of the middle one stood a box which was a shelter for a ‘Charley’. Charleys were the precursors of policemen. One of their duties was to call out every half-hour the time, and the state of the weather. I remember hearing ‘half-past nine, and a starry night,’ or ‘ten o’clock and a foggy night.’ Their life was not altogether an enviable one. It occasionally happened that some young men, returning home rather late, thought it a joke to upset the box with the Charley inside, and there he had to stay till by some means or other he was liberated.” 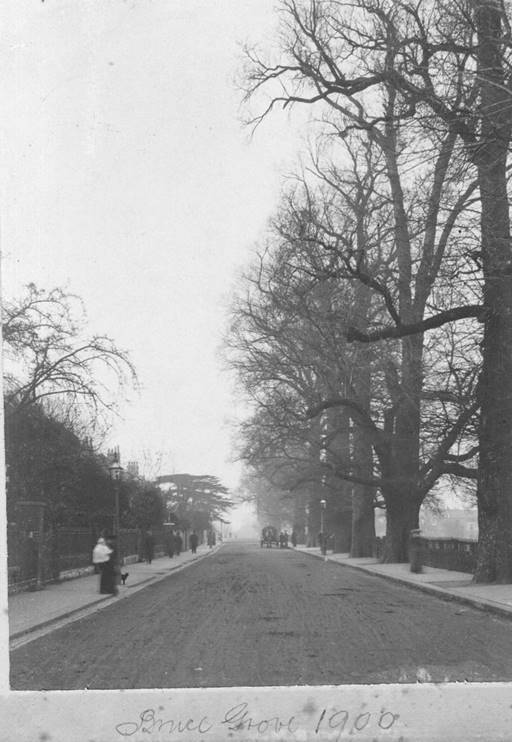 “ This walk was much frequented of an evening by lovers and was by many called ‘Lovers’ Walk.’ “

“ Now, here is a cutting which appeared in 1876: ‘The fine grove of trees that has been so long the ornament of Bruce Grove, and the pride of the residents there, are slowly disappearing, in spite of all the efforts that have been made from time to time to prevent them. Every winter one or more of the gigantic limbs of these ancient dwellers of the Grove, is torn from its parent turn; and recently the high winds have ruthlessly laid one or two low, whilst others are so decayed that it was deemed best to remove them altogether. They have been succeeded by young and vigorous scions of the forest, but how many generations of men must pass away ere they equal their predecessors in size and stature?

In 1899, Bruce Grove, then one of the prettiest remaining spots in Tottenham, began to undergo a change. ‘Elmhurst’, the residence of Mr Lloyd Stacey, was one of the first to be demolished. And little by little various alterations were made; the trees were gradually removed. “

Below are the scenes recording the elm trees being cut down, witnessed by crowds of onlookers. The photograph in the middle shows the very last of the old elms, nearest to the railway bridge taken down in 1903. This of course became the site of the new Bruce Grove public conveniences – eventually the focus of a restoration project championed by the community group ‘The Last Elm’. 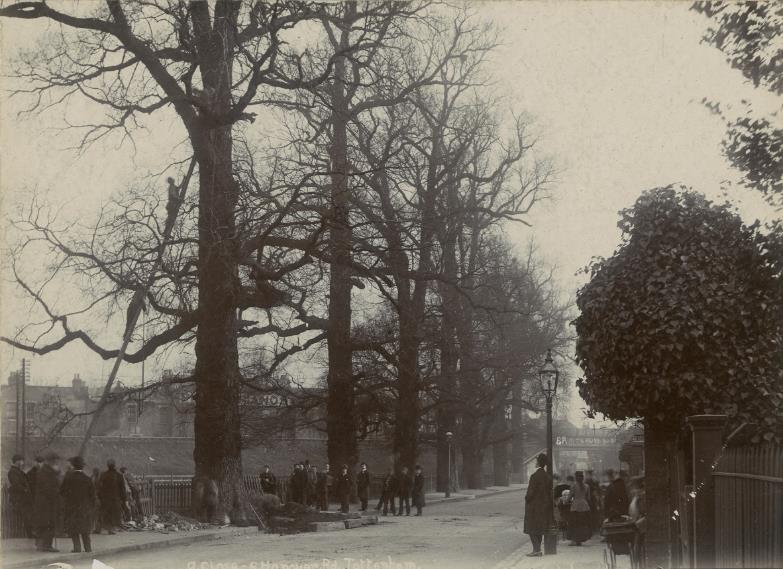 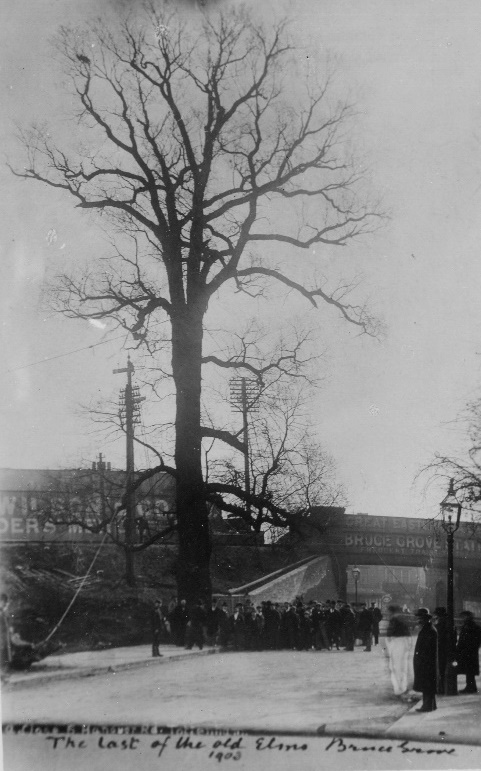 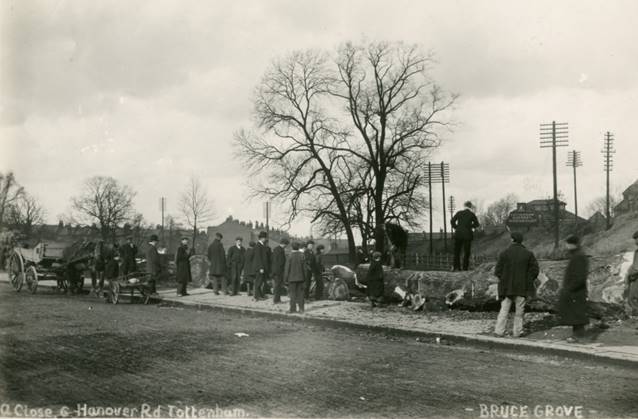 “ The Grove was extended to Lordship Lane, and soon after houses were built, followed very closely by the electric tramway. “

The same year as the elms were felled in 1903, so The Elmhurst pub, with its distinctive corner turret, was built (the date stone of 1903 can be seen in its decorative plaster pargeting). You can see a photograph of it below, taken in the year that it opened. The name is taken from the large house known as Elmhurst that was demolished in 1899, and was owned (as previously mentioned by Fisk above) by Samuel Lloyd Stacey (son of George Stacey, the abolitionist). Nearby Elmhurst Road and The Avenue were laid out on the grounds of the Stacey family’s old house.

The name of the big house ‘Elmslea’ (seen on the 1864 OS map above) was purchased by the Drapers’ Company in 1868, just before they opened their almshouses at the top of Bruce Grove. They ran a school at Elmslea, some details about which you can see here. 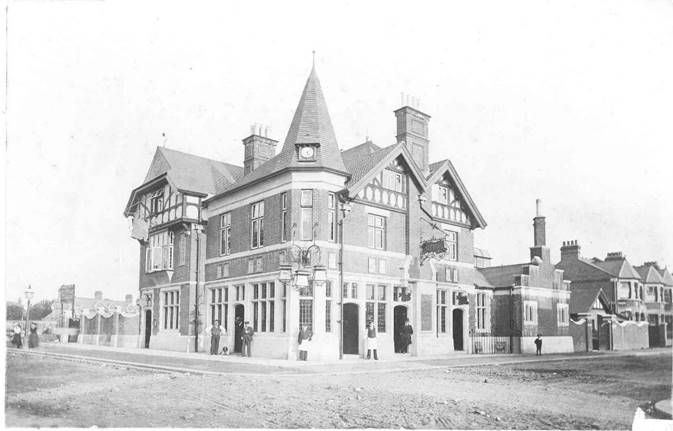 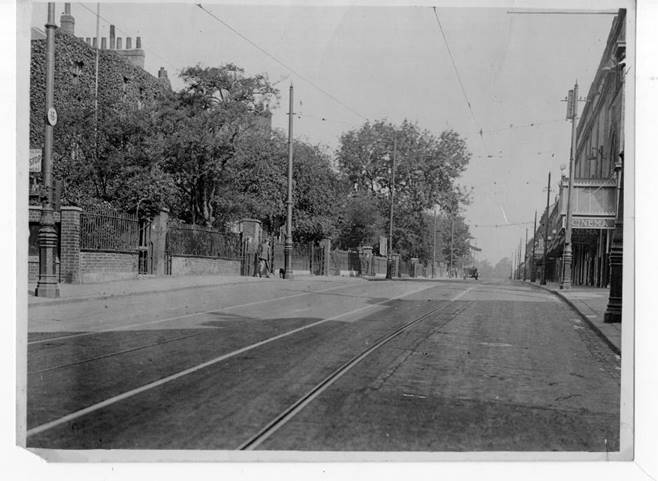 This photograph above, taken in 1928, shows Bruce Grove considerably different, with the parades of shops just visible and the sign for the independent cinema as well. The only trees are in the front gardens of the Georgian houses opposite. The elms are a distant memory.